The fight over health care

The fight over health care 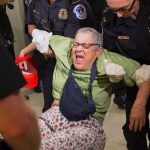 It’s no wonder that Senate Majority Leader Mitch McConnell spent so many weeks hiding his version of Trumpcare, the bill that he hopes will repeal and replace the Affordable Care Act. It’s hideous.
It is a cruel bill that will leave millions of people without access to medical care while delivering a substantial tax cut to the wealthy. In other words, just like the version of Trumpcare that came from the House, the Senate version is a reverse Robin Hood: it takes from the poor to give to the rich.
So let’s get on with it. Republicans should go ahead and repeal and replace the Affordable Care Act, just as they’ve promised to do for seven years now.
No, this isn’t revenge-seeking. This isn’t a primal scream for retributive justice to be administered to all the working-class and poor folk who foolishly voted for President Donald J. Trump. Like many other Americans, I have family members and friends who have benefitted from Obamacare and who would be adversely affected by its repeal. I don’t want them to suffer.
But years of political journalism have taught me much about how voters reach their decisions. And many of us need the contrast between Obamacare and Trumpcare to understand what works best in the fractured and confusing health care marketplace.
The vast majority of Americans don’t spend hours poring over the ins-and-outs of tax policy or reading reams of analysis that explain how health care exchanges work. They react to the forces that buffet their own lives. They respond favorably to political decisions that make their lives better (cheaper access to good doctors), and they respond angrily to political decisions that make their lives more difficult (Medicaid cuts that force grandma out of the nursing home).
Our political leaders have spent decades debating health care, but we haven’t arrived at any consensus. A repeal of Obamacare would give us our best shot at a national debate.
The Affordable Care Act isn’t perfect, but it represented a huge improvement. More than 20 million more Americans have access to medical care because of it. Lives have been saved.
But conservatives were apoplectic when it passed. They were unhappy about a political victory for President Barack Obama because they were committed to painting his presidency as a failure. Equally important, conservatives are opposed to government assistance for health care. (They were against the passage of Medicare back in the 1960s. A political neophyte named Ronald Reagan went around the country campaigning against it.) They believe that you should only see a doctor if you are able to pay for it on your own.
But they knew that Americans would like Obamacare if they got used to it, so they launched a propaganda campaign to portray it as a disastrous government intrusion. They claimed that any increase in the cost of insurance premiums was the fault of the ACA, although premiums had been soaring for years. They made up a ridiculous claim about “death panels” that would kill off the sick and infirm rather than pay for their doctors and prescriptions. They launched countless lawsuits to try to kill the ACA.
The propaganda was remarkably effective. Polls showed a high degree of skepticism toward Obamacare for years. That continued until very recently — when the campaign to replace it got serious. Gallup showed that only 42 percent of Americans approved of the ACA in November 2016, but 55 percent approved of it in April. It’s hard to know what that means.
But Republicans have interpreted their sweeping victory in November as a mandate to replace the ACA with Trumpcare. And, just in the last few days, they were buoyed by GOP victories in special elections in Georgia and South Carolina.
They believe their policies, which include the repeal of Obama’s signature health care legislation, reflect the will of the people. Or, at the very least, they believe that they have gerrymandered enough Congressional districts, amassed enough campaign donations from the super-wealthy and thrown enough black and brown people off the voting rolls that they will continue to win elections.
Let’s go ahead and test that theory.