Too many walls already

Too many walls already 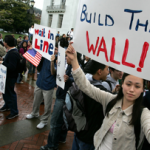 During a rage-fueled rant in Phoenix a few days ago, President Donald Trump threatened a government shutdown if Congress doesn’t appropriate the billions he needs to construct a wall along the Southern border. Though he now ignores his once-upon-a-time pledge that Mexico would pay for the wall, it’s no surprise that the president pulled out a signature red-meat theme.
His poll numbers are trending steadily downward, and a raucous xenophobia tends to energize his base. In a campaign-style rally, he whipped up the frenzy with escalating rhetoric: “If we have to close down our government, we’re building that wall,” he exclaimed, as supporters chanted, “Build the wall!”
Let’s ignore, for a moment, the virtually insurmountable logistical, legal, economic and political obstacles presented by such a project. Even if Trump were to build his promised barrier — and that’s quite unlikely — it would not solve the nation’s biggest immigration challenge: what to do about the undocumented people who are already here.
The huge waves of workers who crossed the border without documents have ebbed to a trickle, slowing substantially during the Great Recession. It was back during the late 1990s and early 2000s that the wave crested, when home construction was booming and businessmen demanded cheap labor.
It was back then that Democratic and Republican administrations alike conspired to ignore the low-wage workers who were surging across the border because big farmers wanted them, hoteliers wanted them, construction magnates (yes, Trump, too) wanted them. Nowadays, rates of illegal entry are about as low as they’ve been in 40 years, if Border Patrol apprehensions are any indication.
But we have insisted on keeping the millions of people who remain here living in the shadows indefinitely. There are among us — cleaning hotel rooms, mowing lawns, attending college, flipping burgers, playing high school basketball, picking onions, supervising construction sites, managing small shops — an estimated 11 million people without papers. They work hard, pay taxes, own homes, attend parent-teacher conferences, speak English and stand for the Pledge of Allegiance to the American flag.
A few go astray, selling illegal narcotics, driving under the influence, joining gangs, robbing stores. But illegal immigrants commit crimes at a lower rate than those who were born here. (To the consternation of his Latino supporters, Obama deported more undocumented immigrants than his predecessor — and Trump — concentrating on violent criminals.)
The criminals are outnumbered by the young adults — known as Dreamers — who qualified for President Barack Obama’s Deferred Action for Childhood Arrivals (DACA), which granted work permits to those who met certain criteria. (Nearly two million were eligible for DACA, but only about 800,000 were actually granted deferrals from deportation.)
Trump, of course, ran on a pledge of mass deportation, and it may be that some of his die-hard supporters still believe that he can round up millions — including grandmothers, kindergarteners and infants — and send them back. But most of us know better.
As it turns out, most of us don’t even want that to happen. According to a Marist poll conducted in February, 80 percent of those surveyed supported a path to citizenship for those illegal immigrants who are already here. That included 69 percent of Republicans. An even larger percentage of Trump’s voters approve of allowing Dreamers to stay — 78 percent, according to a July survey by Morning Consult.
That makes sense. From big cities in California to small towns in Iowa, Americans have gotten used to working with and living beside people with different languages and cultures. That familiarity eases fear and resentment.
Still, the nativist minority has managed to scare the wits out of most Republican politicians, who fear a rightwing election challenge if they dare suggest a reasonable pathway to legal status. Indeed, ten Republican-led states have sued the Trump administration to end the Dreamers’ program. So far, Trump hasn’t responded to the lawsuit, so it’s not clear what he will do.
Though the president has promised to treat the Dreamers “with heart,” his xenophobic impulses have kept the waters roiled, making a grand bargain on immigration reform nigh impossible. Even as a political mirage, Trump’s wall is a formidable barrier to the American Dream for our undocumented neighbors.