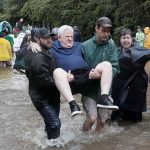 Even President Donald J. Trump, a man who trafficks in hyperbole, has run out of ways to describe the calamity that has unfolded in southeast Texas. He and others have bandied about words such as “epic,” “historic” and “record-breaking,” though mere rhetoric fails to capture the magnitude of the disaster.
Authorities are not yet sure how many lives have been lost, how many families displaced, how much money will be required to restore some semblance of normalcy. But it is already clear that the cost — mental and emotional as well as financial — will be staggering. Houston and nearby towns and cities have been devastated.
The great flood of 2017 may well be recorded as a line of demarcation — the point in time that separates one era from another, the catastrophe that portends an altered future. It may be the moment when humankind’s disdain for the natural world reaches an inflection point, a place of damage done that cannot be undone.
Counting the current disaster, Houston has now endured three 500-year floods in three years time. (The ongoing catastrophe may come to be regarded as a 1000-year flood.) The National Weather Service points out that the designation doesn’t mean a flood will only occur once every 500 years. It means, instead, that there is an infinitesimal chance — about .02 percent — of a flood of that magnitude occurring in any given year. It seems quite remarkable, then, that Houston has experienced three of them in three years.
Remarkable — but no mere coincidence, scientists say. They point to human activity that has made such catastrophic events more likely. Climate change probably exacerbated Hurricane Harvey’s horrific toll, according to climate scientists; unchecked growth and development certainly did, environmentalists say.
Houston and its Gulf Coast neighbors have always endured hurricanes, of course. In 1900, a hurricane struck Galveston and killed somewhere between 6,000 and 12,000 people. It remains the most deadly natural disaster in American history.
But even as we’ve learned to mitigate the death toll through better forecasting and warning systems, we’ve done more to damage the natural barriers that help protect us, especially against flooding.
Take Houston, a city infamous for its lack of zoning laws. Now the fourth most populous city in the country, it has sprawled out over a vast geographic area in recent decades, paving over the prairie and wetlands that normally sponge up excess rainfall. Local officials have spurned environmental regulations even though the Houston area is home to a vast network of oil refineries and chemical plants that are vulnerable during severe weather events.
Only last year, The Texas Tribune, an online news journal, teamed up with ProPublica, a center for investigative journalism, to produce a series — Hell and High Water — on the potential for a disaster of just this magnitude. Sam Brody, a researcher at Texas A&M University at Galveston who specializes in natural hazards mitigation, told Tribune-ProPublica reporters that flooding in coastal Texas is getting worse.
“There’s no doubt that the development … that we’re putting in these flood-prone areas is exacerbating flooding over time,” Brody said.
Still, many local officials reject the science that argues for fewer parking lots, less development, less pavement. One official responsible for flood control told Tribune-ProPublica reporters that “the claim that these magic sponges out in the prairie would have absorbed all this water is absurd.”
The science of climate change has been similarly rejected, not only by Harris County officials but also by Republican Sen. Ted Cruz of Texas, President Trump and much of the GOP. The president, infamously, as referred to global warming as a “hoax.”
But, according to climate scientists, that “hoax” has made epic floods much more likely. For one thing, a warmer planet is melting the polar ice cap, causing sea levels to rise. For another, warmer air holds more moisture, resulting in more rainfall. Harvey dumped 52 inches of rain on Houston, breaking the record for rainfall from a single storm in the continental United States.
The disaster that has befallen east Texas is still being tallied as emergency officials go about the grim task of recovering the dead. But surely the greater tragedy is this: Hurricane Harvey’s calamitous floods will one day seem ordinary.