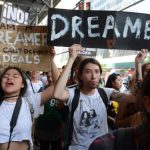 If you listen closely to the most logical arguments presented by immigration skeptics, you’ll hear a recitation of the ways in which undocumented border-crossers drain public resources and strain the social fabric. You’ll hear about people sneaking over the border to take low-wage jobs from American laborers. You’ll hear tales of neighborhood schools overwhelmed by Spanish-speakers. You’ll hear testimony about hospital emergency rooms overrun by non-citizens who need medical care.
You won’t hear about the hundreds of thousands of young adults who have embraced the American Dream wholeheartedly, going to college, earning good salaries and paying taxes. You won’t hear about those who have served their adopted country by wearing an Army uniform. You won’t hear about those who help serve chicken suppers at church and salute the American flag.
And their efforts to become model citizens may not matter. President Barack Obama extended temporary legal status to nearly 800,000 of those young adults through a program called Deferred Action for Childhood Arrivals (DACA), implemented through executive order. But President Donald J. Trump is threatening to end DACA in six months, revoking work permits, drivers’ licenses, travel documents and protection from deportation.
If the president follows through, all those young Dreamers, as DACA beneficiaries are often called, will revert to legal limbo. They won’t be able to drive or fly. They won’t be able to apply for the best jobs because scrupulous employers ask for legal documents. They won’t be eligible for college in some states because ultra-conservative legislatures have banned the undocumented from college admissions. And many, of course, will end up deported — some to countries where they won’t even be able to speak the language.
In making the announcement, Attorney General Jeff Sessions claimed that DACA is unconstitutional, an example of Obama’s “overreach.” Listing a litany of ways in which, he claims, Obama’s executive order exceeded his authority and confounds U.S. legal tradition, Sessions insisted that Trump’s decision honors the “rule of law.”
Don’t be fooled. Sessions is among a hardy handful of Trump advisers who want to tamp down on immigration — both legal and illegal — because white Christian Americans are losing their demographic and cultural hegemony. In other words, Sessions and his cronies want to make America white again.
Though polls show broad support for allowing undocumented workers who came to this country as children to stay (69 percent of Republicans say they should stay, according to a recent Politico poll), DACA was already under assault from Republican governors. Ten GOP-led states had threatened to sue to stop the program if Trump did not end it by this month. Instead of ending DACA immediately, though, the president said he wants Congress to pass legislation protecting the young Dreamers from deportation.
After all, even Trump knows that Dreamers have contributed their talents to their adopted country. “We are going to deal with DACA with heart,” he said in February. “To me, it’s one of the most difficult subjects I have, because you have these incredible kids.”
Those include 25-year-old Tomas Pendola, who teaches high school chemistry in Miami, Fla. He came to this country from Argentina when he was 11, and he has never hidden his undocumented status from his students, he told Univision News.
They include soldiers like Harminder Saini, a 23-year-old DACA recipient who enlisted in the U.S. Army in February 2016. At age 6, Saini came to this country from India, and he is fluent in Punjabi. That allowed him to enlist through a special program for soldiers with desperately-needed language skills.
And they include engineers like Felipe Salazar, who was born in Colombia. He earned bachelor’s and master’s degrees in engineering from Atlanta’s Georgia Institute of Technology. With his DACA credentials, he was able to get a job working for Doppler Labs, a technology start-up in San Francisco.
You’d think we’d want to keep each and every one of those resourceful and hard-working young adults — just the sort we claim we want to welcome. Apparently, though, they don’t look quite like the America some of us want to see.