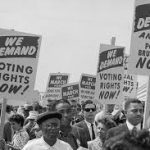 Among true believers on the right, there is no sturdier fiction — no more popular fairy tale — than the one that insists American elections are plagued by voter fraud. “Election integrity” is the hallmark of GOP activists, and stories that purport to show voter fraud are a staple in the rightwing media-sphere.
Every now and then, conservative pundits come up with an actual case of ballot box shenanigans. But as numerous studies have shown, the incidence of voter fraud is infinitesimal. The real problem in American elections is that so few citizens trouble themselves to cast a ballot.
Still, the myth has been circulating for decades now, gaining popularity around the same time that the Voting Rights Act guaranteed black citizens access to the ballot. (Wonder why?) The truth is that the GOP has long practiced the political art of intimidating voters of color at the ballot box, using tactics that are subtle and not-so-subtle.
With Donald J. Trump as president, however, the GOP has abandoned any pretense of subtlety. Trump has plumped up the myth of voter fraud with outrageous accusations, incredible theories and charges that could not possibly be true. He claims that he lost the popular vote because of massive voter fraud, an accusation that makes the wild conspiracies on ABC’s “Scandal” seem like reports from “60 Minutes.”
Then there’s his Election Integrity Commission, a panel whose title turns the truth on its head. Charged with ferreting out the massive voter fraud that Trump invented, the panel is stacked with hacks who have spent decades trying to suppress the votes of people of color. The voter fraud commission is itself a fraud.
Just listen to panel member Kris Kobach, Kansas Secretary of State and an expert in voter suppression. Days before the panel was to meet in New Hampshire, Kobach proclaimed that widespread voter fraud had changed election results there, handing the state over to Democrats. His evidence? He had none. New Hampshire allows students (and others) to vote with out-of-state licenses, and that led Kobach to declare they had voted illegally.
The panel also counts among its members the notorious Hans von Spakovsky, who made his bones as a voter suppression expert in Georgia. He was an early proponent of the purges of voter rolls that knocked hundreds of thousands of legitimate voters off the rosters. And as a high-ranking appointee in the Justice Department of George W. Bush, he made “voter integrity” the centerpiece of enforcement efforts. In other words, he spent taxpayer dollars not on helping the historically disenfranchised to vote but on trying to block them from the ballot.
Many civil rights activists and civil libertarians are worried that Trump’s election commission will recommend yet more draconian regulations that will serve to keep less affluent voters from the polls. I’m beginning to think those fears are overwrought; the commission isn’t credible enough to persuade most rational citizens that the election system is overwhelmed by fraud.
That’s not to say that the voter suppression crowd hasn’t already done significant harm. At the dawn of the 21st century, as demographics were shifting political power to a coalition of voters of color who tend to favor Democrats, Republicans hit on their most effective tactic yet: voter ID.
The requirement for a state-issued photo ID has the benefit of superficial appeal, though it’s actually a way to block the ballot for poorer voters who lack a driver’s license. And as Republicans took power in state after state during the tenure of President Barack Obama, more and more GOP-dominated legislatures passed strict voter ID laws.
Law professor Richard L. Hasen, author of “The Voting Wars,” credits von Spakovsky with popularizing the propaganda about voter fraud. “. . .Thanks to von Spakovsky and the flame-fanning of a few others, the myth that Democratic voter fraud is common, and that it helps Democrats win elections, has become part of the Republican orthodoxy,” he told The New Yorker.
Still, Trump’s Election Integrity Commission is ridiculous, over-the-top and lacking in logic, discipline and simple facts. In other words, It is too much like Trump himself to be taken seriously.