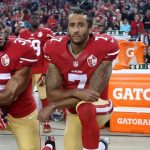 We are a nation at war with itself, cleaved in two by racial, ethnic and cultural differences, each side convinced of its own righteousness. These tumultuous times cry out for a leader of wisdom and maturity, patience and moderation, vision and moral clarity.
Instead, we have President Donald J. Trump. He misses no opportunity to widen the gulf between us, to pour fuel on the raging fires of social and racial conflict, to stoke the smoldering embers of historic tensions. He is the divider-in-chief.
Defying good judgment, Trump has continued the unfortunate tirade he started a few days ago, when he threw a hand grenade into the tinderbox of reaction to athletes’ sideline protests. In an interview that aired on Fox News on Thursday, (9/27), he said that National Football League owners are “afraid of their players.”
Let’s be clear: There is absolutely no reason for the president of the United States to comment on the decision of some football players to kneel during the national anthem. And Trump hasn’t just commented. He has railed. He has ranted. He has thrown verbal punches, using an expletive to insist that NFL owners fire any player who fails to stand.
It is no mere coincidence, of course, that most of the players who kneel are black. The social movement started last year, when Colin Kaepernick, then quarterback for the San Francisco 49ers, sat while the “The Star Spangled Banner” was played before a televised game. “I am not going to stand up to show pride in a flag for a country that oppresses black people and people of color. . . There are bodies in the street and people getting paid leave and getting away with murder,” he later told reporters, referring to police shootings of unarmed black men.
Police violence is already high on the list of issues that divide us. According to an Associated Press-NORC Center poll conducted in 2015, more than 80 percent of black Americans say police are too quick to use deadly force and are more likely to use it against blacks. By contrast, about two-thirds of whites say that police use deadly force only when necessary; about 60 percent of whites say race is not a factor.
Statistics, however, help explain the fears that stalk black families, especially those with sons. While black men make up only about 6 percent of the population, they accounted for one-third of the unarmed people killed by police in 2016, according to data assembled by The Washington Post.
The nation needs a president who is judicious, who can defend the difficult job that police officers do — and the police officers who do it well — while helping all Americans to see the racism that still stalks the criminal justice system. Trump is not that president. He ran a campaign that fanned fears of black crime among his base, and he followed up with an Attorney General, Jeff Sessions, who has all-but-encouraged police violence.
Though Trump has laughably claimed that athletes’ sideline protests have “nothing to do with race,” he knows exactly what he is doing. He is resorting to the ugliest sort of pandering to rally his angry and largely white base of cultural conservatives. And there is a pattern here. Whenever Trump is experiencing political and policy failures in Washington — and he has hardly had a string of victories — he fans the flames of racial and cultural resentment. In the last several days, his latest effort to repeal Obamacare failed, and his favored candidate for the GOP Senate race in Alabama, Luther Strange, lost.
This polarizing president has managed to frustrate even members of his own party, many of whom wish for more discipline and restraint from the Oval Office. But Trump is the natural outgrowth of a strategy that the Republican Party has employed for decades: pandering to the fears and resentments of conservative whites who are uncomfortable with the pace of social change.
That unfortunate strategy has helped the GOP hold onto power, but at what cost? A country irretrievably broken?