This is American exceptionalism

This is American exceptionalism 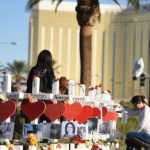 On Aug. 1, 1966, Charles Whitman opened a peculiarly American chapter in the history of violent deaths. Mowing down unsuspecting students and tourists from a tower at the University of Texas in Austin, Whitman pioneered the era of mass shootings in this country. He killed 15 people and injured 31 others.
Since Whitman’s massacre a half-century ago, mass shootings have become so commonplace that politicians, police officers and journalists have ritualized their responses. President Donald J. Trump has now given his first White Address in response to such an act of “pure evil,” but, if his presidency lasts the expected four years, it likely won’t be his last.
According to a database assembled by Mother Jones magazine, there were 37 mass shootings during President Barack Obama’s tenure, including terrorist attacks at Fort Hood, San Bernadino and Orlando and the unspeakable atrocity at Sandy Hook Elementary School. (Obama’s administration changed the definition of mass shooting, lowering the number of victims from four to three.)
Yet, here in the most powerful and wealthiest nation on earth, here in the land of earth-shaking technology, of Nobel laureates and first-rate universities, of a constitutional democracy revered the world over, we do nothing to combat this strange malady. We have become inured to this particular madness, even though we know the next mass shooting may well be worse than the last. If the gunmen are crazy, what are we?
The opioid crisis has grabbed the attention of lawmakers — as it should. According to the Centers for Disease Control and Prevention, overdoses from opioids — a class of drugs which includes heroin as well as some prescription meds — killed more than 33,000 Americans in 2015, the last year for which reliable figures are available. The Food and Drug Administration, the CDC, the Drug Enforcement Administration and local governments have responded with alacrity, tightening guidelines for prescriptions, opening centers for treatment, even arresting doctors who run “pill factories.”
But more than 33,000 Americans are killed every year with firearms, and we shrug. (The vast majority, by the way, are suicides, not homicides.) And buy more guns.
This is an American disease. No other nation has elevated guns to religious objects and given them a sacred space.
Don’t say that our Constitution demands it. Go read the Second Amendment again. It begins this way, “A well-regulated militia, being necessary to the security of a free state . . .” For most of the nation’s history, legal scholars, liberal and conservative, agreed that the Founding Fathers did not intend to protect an individual’s right to firearms. It wasn’t until 2008 that the U.S. Supreme re-wrote the meaning of the Second Amendment, declaring, for all intents and purposes, that an individual may own as many guns as he or she wishes.
That’s just part of the insanity. The National Rifle Association sees no limit to the arsenals that private citizens should be allowed to own. And it goes further: It doesn’t want to apply any common sense measures that would stop thieves or terrorists from firearms. The gun lobby has objected to technology that would allow a gun to recognize its owner’s handprint and only be fired by him or her. Why?
The NRA has even bullied Congress to shut down any funding to the CDC to study deaths from firearms. In other words, the gun lobby won’t allow the research necessary for us to learn how we might prevent the loss of so many lives.
If you think that sanity will be restored in the wake of the Las Vegas massacre, think again. Because the NRA has spent decades in an illogical wilderness of its own making, it is now being hailed for the tepid gesture of suggesting that “bump stocks,” which allowed Stephen Paddock to fire so many rounds so rapidly, should be more tightly regulated. But that doesn’t go nearly far enough stop future atrocities.
It’s likely to be decades before the nation can bring itself to confront this crazed gun culture. In the meantime, many more Americans will die.