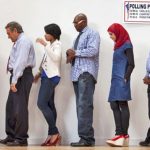 The franchise is a formidable weapon. That’s why it is despised by dictators, authoritarians and anti-democrats the world over: It is the one instrument that can reliably subvert their intentions, drain their power, interfere with their plans.
Just look at my home state of Alabama, which stunned the nation (and me) the other day by electing a Democrat to the U.S. Senate. Alabama is among the reddest of the red states. Yet, the combination of a deeply flawed Republican candidate, former jurist Roy Moore, and energized progressive voters, especially black voters, was enough to propel attorney Doug Jones to victory.
While many political prognosticators had cast doubt on black voters’ interest in a special election for a U.S. Senate seat, they turned out in huge numbers, accounting for about 30 percent of the electorate. There had not been so enthusiastic a showing of black voters since Barack Obama ran for president in 2008.
And they supported Jones. According to exit polls, the Birmingham attorney pulled 95 percent of black votes cast. Ninety-eight percent of black women voted for Jones, compared to 37 percent of white women.
That triumph is an inspiration, a testimony to the powerful legacy of the civil rights warriors who put their lives on the line to ensure the franchise for every citizen. It ought to make every American proud to live in a democracy that takes its creed seriously.
Yet, the outcome of the Alabama Senate race is likely to be read differently in some quarters. Among the despots and authoritarians who run the Republican Party, it is likely to be seen as evidence of their failure to effectively block the ballot.
The GOP has given up trying to attract a diverse coalition to its narrow tent. Instead, it has staked its future on resentful whites who are uncomfortable with cultural change. With Donald Trump as president, the party is led by a man who bashes Mexicans, denounces Muslims and portrays black neighborhoods as crime-ridden, poverty-stricken dystopias. There is no way that party can attract voters of color.
So the GOP has spent the past several years engaged in an energetic campaign to keep those voters from exercising the franchise. Jones’ victory won’t discourage those tactics; instead, it will likely re-energize them.
After all, Jones’ margin of victory was razor-thin. Even running against a man weighed down by credible accusations of pedophilia, a racist homophobe who was twice thrown off the state’s highest court for flouting the U.S. Constitution, Jones managed to win by only a little more than 20,000 votes.
For Republicans determined to win at any cost, Moore’s loss simply means that more obstacles should be thrown in front of voters who are likely to support Democrats. If they could shave off a few thousand more ballots, they could ensure victory for even the most troubled — and troubling — candidates.
Their support for strict voter identification laws disproportionately affects black and brown voters, who are less likely to have drivers’ licenses. (In some states, the GOP has ruled college IDs as invalid for voting; that’s because younger voters tend to support Democrats.) And GOP-controlled state legislatures have also cut back early voting and Sunday voting, which had become popular with voters of color.
While Republicans insist that they are protecting against voter fraud, that’s simply not true. There is virtually no in-person fraud of the sort that strict voter IDs laws are ostensibly guarding against. Have you ever heard of a voter showing up pretending to be someone else?
Civil rights groups and organizations such as the American Civil Liberties Union have waged a courageous battle against those voter suppression laws, challenging the rules in court, pouring money into efforts to secure voter IDs for the poor and engaging in old-fashioned get-out-the-vote efforts. They have also started to rally former felons to restore their voting rights.
Those groups will have to re-double their efforts because Republicans are not going to give up on voter suppression. They have nothing to offer except a white nationalism that attempts to disguise their giveaways to the rich, and that’s not a winning formula.