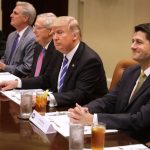 It’s no surprise that Kay Ivey, Alabama’s Republican governor, is touting her support for President Donald J. Trump. Running for election after taking over the governor’s office last year when her scandal-ridden predecessor resigned, Ivey voted for the accused pedophile Roy Moore and has bragged about a law that keeps Confederate monuments in place. Her embrace of Trump is just another pro forma credential for the reactionary right.
Many Republicans who represent enthusiastic Trump voters have similarly tied themselves to his ankle, hoping their loyalty will provide a winning margin.. After all, Trump’s approval ratings — though stagnant at around 40 percent overall — hover at nearly 90 percent among Republican voters.
What is surprising — and deeply disappointing — is that precious few leading Republicans have managed the political courage to confront Trump or to publicly denounce him. Remember when pundits papered over their shock at Trump’s election by referring to the Constitution and its separation of powers, insisting that Congress would keep the ship of state steady? Well, the ship of state is listing, and Majority Leader Mitch McConnell and House Speaker Paul Ryan are cowering in the state room, afraid to rile the imperious and unbalanced captain.
No matter how scandal-plagued the president is, there are just a handful of Republicans who will step forward to criticize him — and most are not seeking reelection. The rest of the GOP — governors and members of Congress, alike — is comfortable coasting in the wake of Trump’s popularity. Never mind the state of the nation.
It’s not so important, apparently, that the president has launched an unprecedented assault on the national security apparatus and the Department of Justice, edging ever closer to a constitutional crisis. It’s not important that he constantly undermines the rule of law. It’s not important that he has a suspiciously close relationship with Russian strongman Vladimir Putin or that he continues to try to subvert the investigation into Russian interference in the 2016 presidential election.
It does not matter, apparently, that Trump has admitted on videotape to sexually molesting women. It does not matter that he engages in explicitly racist rhetoric and has instituted a policy that tears migrant children away from the parents. It does not matter that he is a textbook narcissist, a bully, a tyrant. It does not matter that he has established a plutocracy, mining the Oval Office to plump up his family’s fortune. All that matters to most Republicans, clearly, is that Trump won the presidency (even if Russian helped him over the hump).
Yes, there are a very few brave Republicans who see their patriotic duty as upholding the U.S. Constitution rather than seeking favor with the president. Arizona Sen. John McCain has never wavered in expressing his distaste for Trump’s behavior and his disapproval of some of his policies. But McCain is likely terminally ill. He has little to lose but his reputation.
Likewise, Arizona Sen. Jeff Flake has lately been unflinching in his criticism of Trump, a Never Trumper from the beginning of the president’s primary campaign. Flake’s book, “Conscience of a Conservative,” denounces the “embrace of ‘alternative facts’ at the highest levels of American life.” And in a recent commencement speech at the Harvard University School of Law, Flake castigated Trump: “Our presidency has been debased by a figure who has a seemingly bottomless appetite for destruction and division and only a passing familiarity with how the constitution works,” he said.
But Flake is so unpopular in his home state that he gave up and decided not to seek reelection. His constituency would much rather have a morally-challenged tyrant such as Trump than an honest, dyed-in-the-wool conservative such as Flake.
This is bad news for the nation and worse news for the Republican Party. But GOP leaders have only themselves to blame. For generations now — at least since the presidential campaign of reactionary Barry Goldwater — GOP strategists have stirred the fears and resentments of whites who were uncomfortable with cultural change, stirring their tribalism, stoking their xenophobia. Now, the Republican Party is stuck with a base that is, at its core, a narrow tent of white nationalists. It is hard to see how the GOP will ever recover.