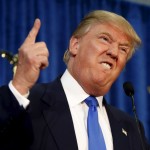 In the administration of President Donald J. Trump, truth is scarce, discipline is weak and old-fashioned virtues such as modesty have gone into hiding. Cynicism, however, flourishes. Just take a look at the president’s proposal to pare back government spending.
Trump has sent Congress a proposal to cut funds just allocated in January for the Children’s Health Insurance Program, a 1990s-era plan that provides health insurance for children and pregnant women in families of average means. States get to decide who is eligible, so it varies. In Texas, for example, a family of four earning up to $50,058 a year is eligible for the program, while in Alabama, a family of four earning up to $77,031 annually is eligible.
That’s exactly the socio-economic sector that Trump repeatedly vowed to help during his presidential campaign. He homed in on anxious white voters who believed they were being squeezed out of the American dream. He promised to restore their economic security. He pledged to make health care more affordable, more accessible and generally “better.”
He has done nothing of the sort. In fact, he has done the opposite, wrecking the Affordable Care Act so that premiums are soaring and, now, moving to cut nearly half the funds allocated for CHIP. Why? Republicans have suddenly contracted deficit fever after passing a whopping tax cut that overwhelmingly benefits the rich, a decision that will add an estimated $1.8 trillion to the deficit over the next decade.
So where did the president start when he decided he must make a show of restoring fiscal sanity? He began by targeting one of the most successful policies aimed at families of average means, a well-respected program that has previously drawn bipartisan support.
The families who qualify for CHIP are by no means poor, and they are hardly indolent. They are hard-working folk who earn too much to qualify for Medicaid.
Let’s say parents own a small convenience store or run a small plumbing business. Without CHIP, they’d find health insurance for their kids impossibly expensive. Years ago, a pastor of a small church in Georgia told me that CHIP was the only way he could afford health coverage for his kids.
Currently, CHIP provides health insurance to about 9 million people; over the last 20 years, it has cut the uninsured rate among children from 14 percent to 5 percent, according to government data.
Since Trump sent the plan to take back about $7 billion to Congress a few days ago, his GOP defenders have argued that no families will be hurt by the cuts because they are excess monies, more than states are likely to spend in the next budget year. But $2 billion would come from the surplus fund, which might be needed in the event that families run into unexpected difficulties, such as the recent California wildfires, which closed many businesses, or the Texas floods. The other $5 billion could have been used for other children’s programs.
The consequences of many of the president’s decisions are too complicated and slow-moving to filter down quickly to the average voter. His disastrous decision to pull out of the Paris climate accord likely means global warming will continue unabated, but most of us will be unable to measure the difference. His horribly destructive judgement about the Iran treaty will make the world a more dangerous place, but the consequences will show first in the Middle East.
The president’s conning of the white middle-class, however, is already reaping immediate and unfavorable results in the lives of many white families, from his decisions on health care to his nattering on about tariffs to his assaults on consumer protections. Surely, they will notice soon enough.
Of course, Trump famously said back during the presidential campaign that he could “stand in the middle of 5th Avenue and shoot somebody” without losing any voters. Perhaps his cynicism will serve him well, after all.