A black woman governor for Georgia?

A black woman governor for Georgia? 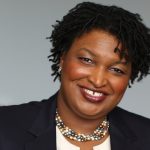 As Georgia’s Democratic nominee for governor, Stacey Abrams has taken on a daunting challenge. If elected, she would be the first black governor of a Deep South state — and the first black woman governor of any state.
Despite the excitement she has generated among Democrats nationwide, Georgia has remained reliably red for the last two decades. It elected its last Democratic governor, Roy Barnes, in 1998; the state last went for a Democratic presidential candidate in 1992, when Bill Clinton barely edged by George H.W. Bush with 43 percent of the vote, largely because of the third-party candidacy of Ross Perot.
Still, Abrams may have received an unexpected gift from Georgia’s Republican voters earlier this week. As their nominee for governor, they chose the state’s Secretary of State, Brian Kemp, who had decided to campaign as a rightwing nut-job — xenophobic and gun-crazy. For his trouble, he received the endorsement of President Donald J. Trump.
Kemp is no Roy Moore. Last December, Moore lost a special election for a U.S. Senate seat from Alabama, a crimson red state, to Democrat Doug Jones, stunning the political world. Moore had not only shown open contempt for the U.S. Constitution — and as the chief judge of the Alabama Supreme Court, no less — but he had also been credibly accused of sexually molesting teenaged girls. That was more than some Alabama Republicans could stomach.
Kemp doesn’t bring that sort of baggage to the race, but his campaign was still stomach-churning. In political ads, he was frequently shown with his arsenal of weapons, either threatening to shoot someone or to blow something up. In one bizarre ad, he is seated — shotgun across his lap, in a room filled with firearms — next to “Jake,” a young man who supposedly wants to date one of Kemp’s daughters. After Jake recites several of Kemp’s policy positions, Kemp points the gun at him and says, “We’re gonna get along just fine.”
But the ad that has drawn the most attention is the one in which Kemp proudly announces himself the “politically incorrect conservative.” In it, he proudly shows off his big pickup truck, “just in case I need to round up criminal illegals and take ‘em home myself.”
Will Georgia’s white suburban voters, especially professionals who worry about the state’s national image, line up behind that guy? Will business owners who need immigrant labor vote for Kemp’s explicit bigotry?
Abrams, a Yale-educated attorney and former minority leader of the Georgia House of Representatives, may not be able to draw many of those traditional Republicans into her camp. And she hasn’t tried that hard to do so. Running a primary campaign against Stacey Evans, a fellow legislator who campaigned hard among whites in rural areas, Abrams has aimed, instead, to attract new voters, especially those of color.
She hails from the progressive end of the Democratic coalition and has won the endorsement of Sen. Bernie Sanders. She supports stricter gun regulations, more government-funded health care and de-criminalizing marijuana. On cultural issues, she is unabashedly liberal, calling for the removal of Confederate iconography from Stone Mountain, a huge granite dome in suburban Atlanta into which giant faces of three Confederate generals were carved.
And she has always based her campaign on the premise that traditional southern white voters are unlikely to cast ballots in large numbers for a Democratic candidate, no matter what his or her policies are. As Abrams told The Nation in 2017:
“There are two theories of the case, running in a red state. You convince conservative voters who left the party years ago to come back, by offering them a candidate who appeals to the value system they hold to be true. . .
“I look instead at the greenfield opportunity of other progressive voters: African Americans, Latinos, Asians, and some white voters who don’t vote. I believe the alternative theory of the case, and one we’ve never tried in Georgia, is to cultivate voters who’ve never been reached.”
Abrams’ path to victory remains a very narrow one, but Kemp may have just widened it a bit. Suburban Republicans may not vote for her, but they may well stay home rather than cast a ballot for him.