Crime is falling, fear is not

Crime is falling, fear is not 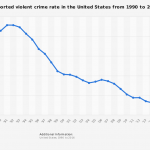 Mobile, AL. — Listening to some campaign commercials, I’m swept into the 2013 horror film, “The Purge” — which portrays a terrifying evening of violent crime. Here in Trump country, politicians running for posts from sheriff to attorney general are pledging to bring an end to what the president has infamously called “American carnage.”
Steve Marshall, facing a July 17 runoff for the Republican nomination for Alabama Attorney General, is championing a bill that would further limit appeals for death penalty defendants. Never mind that Alabama already executes more felons than most states and has had its share of death row defendants exonerated because they were wrongly convicted.
Marshall’s opponent, meanwhile, Troy King, a former state attorney general, claims that violent crime was at its “lowest level in 20 years” when he left office in 2011 but now is at “historic highs.” That’s not even close to factually correct.
Still, it sells among that portion of the population that is given to believing such things. The Trump administration’s machinations have made frighteningly clear that democracy is a fragile thing, mostly because of the vulnerabilities of human nature. Among those are these: belief is more powerful than fact, and emotion trumps (pun intended) reason. That’s especially true of fear, the most powerful of human emotions.
President Donald J. Trump notoriously made the fear of violent crime a cornerstone of his presidential campaign, repeating statistical distortions, half-truths and downright lies to paint urban areas, especially, as cesspools of savagery. He frequently repeats his signature slander against undocumented immigrants, portraying them as threats to law and order. And he continues to focus on MS-13, a violent gang of criminals to be sure, but nowhere near the threat that Trump suggests.
The truth is that violent crime nationwide continues to be at historic lows, according to statistics compiled by the FBI. Some areas have experienced upticks, especially in the murder rate. In 2017, violent crime increased slightly — by 4.1 percent — over the year before, led by an increase in homicides in several major cities, including Chicago, Baltimore and Las Vegas. That followed a slight increase in 2016, as well. That’s troubling.
Still, if you were to see a chart that graphed violent crime statistics from 1990 until now, you would see a line that went nearly vertical until 2000, when the drop-off continued but in a less-dramatic slope. The decrease in crime has been so remarkable that it has allowed for the rejuvenation of previously blighted areas of major cities, from Atlanta to Washington, D.C. to Oakland, as middle-class residents moved into center cities.
So why do so many people believe the opposite?
According to the Pew Research Center, Americans have long believed that violent crime is higher than statistics show it to be. “Opinion surveys regularly find that Americans believe crime is up nationally, even when the data show it is down. In 17 Gallup surveys conducted since 1993, at least six-in-ten Americans said there was more crime in the U.S. compared with the year before, despite the generally downward trend . . ..,” Pew’s John Gramlich wrote earlier this year.
I must confess that my profession contributes to the distorted view. While most journalists are committed to ensuring a well-informed citizenry, it is also true that our emphasis on the unusual — the very definition of “news” — means that violent crime gets a lot of attention in headlines and newscasts. That’s especially true of local TV news, where “if it bleeds, it leads” is still the organizing principle.
But Trump recognized and eagerly exploited a prejudice among many voters that makes them vulnerable to his tales of dystopia: an often-unconscious belief that black and brown Americans are dangerous, tending to vice and violence. That’s why the president so often resorts to stigmatizing illegal immigrants as criminals, though immigrants tend to commit crimes at lower rates than the native-born population.
A decade ago, I believed that falling crime rates would enable genuine reform of the criminal justice system, from police procedures to prosecutorial conduct to prison sentences. If the streets were safer, I thought, there would be no reason for police and prosecutors to behave as if they were holding off Armageddon.
I was wrong. Armageddon, it seems, won’t be defeated by facts.