The Pope blasts the death penalty

The Pope blasts the death penalty 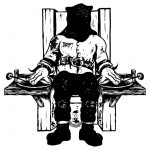 In 1988, Walter McMillian was convicted of a crime he didn’t commit and sentenced to death, charged with the1986 murder of Ronda Morrison in my hometown of Monroeville, Al. McMillian was a poor black man, so local authorities found it relatively easily to dragoon him for the murder of a young white woman, despite the testimony of multiple witnesses who said he was elsewhere when Morrison was killed.
McMillian caught a break, though. His case was taken up by a highly-skilled and dedicated defense attorney named Bryan Stevenson, and he was eventually exonerated. Others have not been so lucky.
In 2014, a group of researchers released a study suggesting that about four percent of the people sentenced to death are, in fact, innocent. Reviewing 7,482 death sentences handed down between 1973 and 2003, the researchers noted that 117 people — or 1.6 percent — had been exonerated. (According to the Death Penalty Information Center, more than 162 people have now been exonerated.) But they concluded that, given enough time, another 4.1 percent — more than 200 people — would be cleared.
That’s chilling, since some of those innocent people have undoubtedly been put to death. It means that states across the nation are guilty of murder.
Condemning the innocent is the most glaring problem with the death penalty, but it’s by no means the only problem. It is unfairly administered, brim-full of biases around race and class. It does not deter crime. It makes a mockery of justice.
In deciding to place the Catholic Church in clear opposition to capital punishment, Pope Francis may have pondered those glaring flaws. But he did not say so. Instead, he spoke of its inhumanity. “There is an increasing awareness that the dignity of the person is not lost even after the commission of very serious crimes,” according to the Vatican’s statement, released earlier this week.
Pope Francis has long opposed the death penalty. (And the Catholic Church has long been skeptical of it.) In a landmark address to Congress in 2015, he called for its abolition. “I am convinced that this way is the best, since every life is sacred, every human person is endowed with an inalienable dignity, and society can only benefit from the rehabilitation of those convicted of crimes,” he said then.
But the pope’s decision to label the death penalty “inadmissible” in all cases probably won’t have much practical effect on the practice. Few countries still use it. The United States is among the rare Western democracies that do.
In the United States, its popularity has been in decline for decades. Recently, support for capital punishment has ticked up a bit, from fewer than half in favor in 2016 to 54 percent in May, according to the Pew Research Center. Still, that’s much lower than the 64 percent who supported it as recently as 2007. That decrease has followed decades in which the rate of violent crime has fallen.
Yet, there are states that eagerly embrace capital punishment, many here in my native South. Oklahoma, Texas, Mississippi, Alabama, Louisiana, Georgia, South Carolina and Arkansas are among those with the highest rates of executions, according to the Death Penalty Information Center.
Perhaps it won’t surprise you to know that 41 percent of those on death row across the country are black, even though black Americans constitute less than 13 percent of the nation’s population. That’s just one of the ways in which capital punishment shows its bias.
Even more striking is the statistical difference you notice when you look at the race of victims: If you consider all the murder cases which result in a sentence of death, 75 percent of the victims are white, though whites account for just 50 percent of murder victims overall, according to the Death Penalty Information Center. Only 15 percent of the victims are black. What does that tell you about the way the criminal justice system values black lives?
Pope Francis didn’t mention any of that. Nor did he need to. He was explicit in his view that the death penalty is unjust and inhumane, and that’s obvious from the evidence.