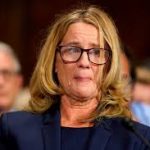 Many years ago, when I was in my early 30s, a man tried to force me to perform fellatio on him. He grabbed the back of my head with one hand and tried to force my face down to his crotch as he unzipped his pants with his other hand. We were sitting in a car in broad daylight in the parking lot of the newspaper where I worked.
Still, he trusted that I wouldn’t scream. I didn’t. I was too stunned and embarrassed. I said, “No! Stop!” repeatedly to him, but that didn’t matter. Finally, I managed to fight him off and escape the car.
I have never told anyone that story. Ever. I was too ashamed. As most victims of sexual assault tend to do, I blamed myself. I barely knew the man — he was married to a casual acquaintance from my hometown — but he had invited me to lunch on the pretext that he wanted to learn more about local politics. I thought it must be my fault, that I had sent some subtle signal that provoked his actions. So I never spoke of it.
I had buried the episode so deeply in the far reaches of my memory that it didn’t surface as the first accounts of #MeToo victims drifted out. I didn’t remember it when I heard the credible testimony from Bill Cosby’s victims. I only recalled it after hearing Christine Blasey Ford’s searing and emotional testimony before the Senate Judiciary Committee.
If I needed friends to corroborate my story, there would be none. If I needed a therapist to testify to my truthfulness, there would be no accounts of my having confided that assault in the course of treatment. As has happened to so many survivors of sexual assault, my recollections would simply be discounted or dismissed.
According to statistics from the Rape, Abuse and Incest National Network, out of every 1,000 sexual assaults, only 310 are reported to police. And, RAINN says, only six perpetrators are incarcerated for every 1000 rapes. That’s not only because jurors often doubt the victim’s testimony, but it’s also because police and prosecutors take those crimes less seriously. Forget what you’ve seen on “Law and Order: SVU.” Most police departments don’t operate that way.
Much more typical is the treatment meted out to Ford. Her brave testimony was met with doubt and derision from powerful Republicans, including President Donald J. Trump, and with much worse from anonymous Internet trolls.
She has friends who could testify that she told them Brett Kavanaugh assaulted her — before he was nominated to a seat on the U.S. Supreme Court. She told her husband. She told her therapist. But Republican members of the GOP-dominated Senate Judiciary Committee didn’t want to hear from her friends. They refused to summon Mark Judge, a high school buddy of Kavanaugh’s who was supposedly in the room when Kavanaugh allegedly assaulted Ford. They refused to request a follow-up investigation by the FBI.
And, of course, Kavanaugh has denied ever doing anything of the sort. If his current version of his high school resume is any guide, he was a perfect angel during his adolescence. He never so much as made an unkind comment to a young lady. Never mind that he left a trail of evidence, including his high school yearbook, that tells the tale of a loutish young man given to behavior that bordered on misogyny.
There are those who will believe Kavanaugh’s story, no matter what. There are partisans who will continue to insist that Ford’s testimony, even if it contains a grain of truth, is the result of a vast leftwing conspiracy. Democrats, they claim, will go to any lengths to discredit a conservative jurist. Sen. Lindsey Graham (R-S.C.) went so far as to swear vengeance against judicial nominees put forward by Democrats. “If this is the new norm, you better watch out for your nominees,” he said.
But I believe Christine Blasey Ford. She was credible, straight-forward, persuasive. She didn’t remember certain details, but others she will never forget. I understand completely.
Despite the harassment she has endured, her courageous testimony will convince many other women to share their painful stories. #MeToo.