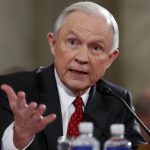 Former Attorney General Jeff Sessions is a xenophobe who opposes even legal immigration, a heartless nationalist who allowed small children to be snatched from their parents’ arms, a bigot who supported voter suppression in Alabama, a throwback who is a hardcore opponent of legalized marijuana. Still, his ouster is bad news for a nation built on the rule of law.
President Donald Trump’s insistence on firing Sessions — the president’s advisers persuaded him to hold off until after the mid-term elections, but just barely — is the most frightening and definitive sign yet that he is a despot with no respect for the fundamental values of a democratic republic. He fired Sessions because the attorney general — right-winger though he may be — could not bring himself to besmirch his office by ignoring the values it is bound to uphold.
When Democrats pointed out that Sessions had played a role in Trump’s presidential campaign, the attorney general recused himself from the investigation into Russian interference. If Sessions had not done so, his oversight role would have been a clear conflict of interest and invited speculation that the probe would not be thorough.
But Sessions’ decision made Trump furious. The president wanted his attorney general, whom he considered an ally, to thwart the Russia investigation. Trump continues to believe that the attorney general’s job is not to uphold the U.S. Constitution but to protect Trump. So he immediately appointed a toady, Matthew Whitaker, an outspoken critic of Mueller’s investigation who had served as Sessions’ chief of staff, as acting attorney general.
Whitaker has already signaled a possible strategy. Back in July, he said on CNN: “I could see a scenario where Jeff Sessions is replaced with a recess appointment … and that attorney general doesn’t fire Bob Mueller, but he just reduces his budget to so low that his investigation grinds to almost a halt.”
Whitaker’s agenda underscores the importance of Democrats’ takeover of the House of Representatives. While they don’t have the power to protect Mueller, they do have the subpoena. They can mount multiple investigations that will keep the spotlight on Trump’s transgressions. They can subpoena Mueller to testify at public hearings. And if Mueller has evidence indicting that Trump colluded with Russia, Democrats can start impeachment proceedings against the president.
I don’t say that lightly. I haven’t agreed with those progressives who have pushed for Trump’s impeachment for months now. There is little justification for pointless political fury meant only to disrupt the White House, to return the vilification that Trump has aimed at Democrats. (Besides, the removal of Trump from office would leave us with President Michael Pence, a worse result. Pence understands the political process, which makes him even more dangerous than Trump.) But if Trump has colluded with a foreign adversary, impeachment is the appropriate response.
The president may not leave Congress with any choice. He has already ranted against the prospect of a Democratic Congress starting scrutiny of the corruption and ineptitude of his administration — even though a Republican Congress wasted countless hours and millions of dollars with dumb investigations during the tenure of President Barack Obama. (Anybody remember Benghazi?) In a rambling press conference the day after the elections, the president said that Democratic probes would invite a “warlike” response from his White House.
Many left-leaning voters were disappointed by the results of the mid-term elections, which not only left the U.S. Senate in Republican hands but also shut out young Democratic stars in state races that might have gone their way. Pundits were quick to dismiss the predicted “blue wave” as nothing more than a modest tide undulating to shore.
But that underestimates the power that Democrats now enjoy in Congress.
Voters built a wall. From Georgia, where Democratic newcomer Lucy McBath beat GOP Rep. Karen Handel in a district once held by Newt Gingrich, to California, where the loathsome, Putin-loving GOP Rep. Dana Rohrabacher is going down in defeat, voters built a wall. It isn’t insurmountable, but it will shore up the foundations of democracy.