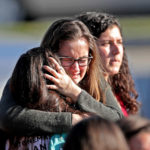 The death of New York City police Detective Brian Simonsen, who was fatally wounded Feb. 12 in a “friendly fire” incident, is tragic. The officers whose shots struck their fellow officers — not only killing Simonsen but also wounding another, Sgt. Matthew Gorman — are unlikely to ever fully recover emotionally and psychologically. They killed or wounded their own.
But the tragedy also presents a profound lesson for those who care to learn it: The gun lobby’s dogged insistence that more guns will make us safer is lunacy. The fanatics among gun owners continue to insist that “good guys with guns” can prevent mass shootings, strike down criminals and contribute to the peace. That’s just foolishness, the fantastic thinking of children who watch super-hero movies. Studies show that even police officers often miss their targets in a live-fire scenario.
That’s apparently what happened Tuesday night in Queens, when several officers responded to a report of an armed robbery at a cell phone store. Simonsen and Gorman were among the first to arrive, according to published reports, and saw a man with a gun pushing employees of the store toward a back room. They entered along with a third officer; when the suspect saw them, he pointed his weapon at them. They started to back away.
By then, though, several other officers had arrived on the scene. When they saw a suspect with his gun raised, pointing it at police officers, they fired. After the suspect, Christopher Ransom, was arrested, they inspected his weapon. It turned out to be a fake firearm, the New York Times has reported.
New York City employs more than 36,000 police officers; its police force is as large as the armies of some small countries. As the largest and oldest police force in the United States, it takes professionalism seriously. (That doesn’t always prevent police brutality, as the death of unarmed civilians such as Eric Garner has shown.) It spends tens of thousands on training for each new recruit. Yet, the department’s own study of officer-involved gunfights between 1998 and 2006 found police had an average hit rate of 18 percent.
Somehow, those basic facts have not penetrated the stubborn and irrational minds of gun fanatics. A year after the atrocity at Majory Stoneman Douglas High School in Parkland, Fl., seven years after the atrocity at Sandy Hook Elementary School in Newtown, Conn., the National Rifle Association and its allies continue to insist that teachers should be armed.
President Donald J. Trump is a proponent of that strange and dangerous tactic. After the Parkland shooting, he endorsed the gun lobby’s call for arming teachers. That’s also what Florida Gov. Ron DeSantis supports. “If you’re somebody who’s working at a school and you’re somebody who’s trained and who has the ability to do it then you shouldn’t be precluded from carrying a firearm that could potentially deter people,” he said recently.
Never mind the potential for killing children caught in the crossfire. The Florida Legislature is pushing ahead with a proposal to arm teachers, despite the fact that the majority of Floridians are opposed to more guns in schools, according to polls. The state’s teachers’ union is dead-set against the idea, the Miami Herald reports.
If the proposal passes, Florida would join eight other states that allow certain categories of licensed gun owners to carry their weapons into the classroom. In fact, according to The New York Times, hundreds of school districts across the country, most small and rural, have already armed at least some of their teachers. The havoc and harm created by more firearms will certainly increase in those schools.
Even confident and experienced hunters would have a difficult time in a gunfight. After all, deer and turkeys don’t shoot back. Nor are their children running and screaming on a typical hunting excursion.
Are these gung-ho school districts prepared for the first time a teacher or school security guard shoots a child?