The racist history of blackface

The racist history of blackface 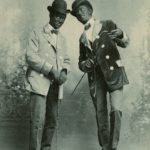 February is the time for the ritual observance of Black History Month — a brief period when schools, government institutions and even commercial enterprises feel compelled to commemorate a handful of famous black folk who made substantial contributions to American history. It’s a gimmick, an awkward and superficial observance aimed at ameliorating the centuries spent dismissing black Americans as marginal or worse, and I don’t care for it.
But this February has been overwhelmed by some perplexing news events that give me reason to think that some black history lessons are in order. If white men in power are as cavalier about smearing black shoe polish on their faces to mock their fellow black citizens as news reports suggest, then we ought to have a serious discussion about history. Not black history, but American history. The sojourn of black people in this country is, after all, part and parcel of American history — not some footnote or sidebar that is separate and distinct from the story of this nation. And much of that story, if told accurately, must dwell on the brutality, oppression and rank discrimination that black Americans have endured.
The popularity of minstrelsy and blackface in the 19th century came out of that era’s ugly insistence on white supremacy and black inferiority. In minstrel shows, white performers smeared their faces with burnt cork to lampoon black folk as lazy, stupid, libidinous and criminally-inclined. As whites portrayed them, blacks were happily enslaved, desperately in need of the “civilizing” hand of their white masters.
Nor was this “entertainment” limited to the Deep South. A group of singing, dancing, strutting white men in blackface, calling themselves the Virginia Minstrels, first appeared at a New York City theater in 1843. The stereotypes endured long after the war ended.
And their success spawned many imitators. Frederick Douglass once called blackface minstrels “…the filthy scum of white society, who have stolen from us a complexion denied them by nature, in which to make money, and pander to the corrupt taste of their white fellow citizens.”
Perhaps the particulars of that history have largely been lost to many of the whites of our era who have found donning blackface funny. That group includes not only Virginia Gov. Ralph Northam but also Virginia Attorney General Mark Herring, who admitted days after controversy engulfed Northam that he had donned blackface as a college student. It also includes former Florida Secretary of State Michael Ertel, who resigned last month after photos emerged showing him in blackface at a Halloween Party in 2005.
But you need not know the particulars of history to know that this is a cruel form of mockery, a throwback to a time and place when black people were deemed inferior by law and custom. Ertel was certainly mocking the traumatized black victims of Katrina when he presented himself for a party wearing blackface and a shirt that read, “Katrina victim,” with fake boobs underneath. The party was held just two months after the massive storm that killed more than 1,800 people and devastated countless more. That’s funny?
Northam has, so far, refused to resign, insisting on presiding over a statehouse struggling in a tsunami of scandal. (Lt. Gov. Justin Fairfax, who would presumably take the office if Northam resigned, has been accused of sexual assault.) Indeed, after first apologizing for appearing in blackface in a photo in his medical school yearbook, he later said he wasn’t in the photo. (Northam did, however, admit to smearing black shoe polish on his face to imitate Michael Jackson during a college dance contest.) He plans to hire a private investigator, according to published reports, to solve the mystery of a how such a photo could have appeared on his yearbook page. In the picture, by the way, the person in blackface is standing next to someone dressed in a Ku Klux Klan robe and hood, another costume meant to be . . .ah, amusing?
It is hard to imagine that anything uplifting or inspiring can come out of these tawdry episodes, but perhaps a bit of commonsense instruction is enough: blackface offensive, suggestive, at least, of racism. That bit of history should be consigned to the dustbin.