The costs of that climate ‘hoax’

The costs of that climate ‘hoax’ 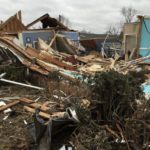 A week ago, a series of tornadoes ripped through eastern Alabama and western Georgia, leaving a trail of death and destruction in their wake. A rural area of Lee County, Al. — the county is also home to my alma mater, Auburn University — caught the brunt of the killer storms, which left 23 people there dead. Mobile homes were blown apart; brick houses were flattened; cars and trucks were wrapped around trees.
Tornadoes such as this brutal one — nearly a mile wide and bringing winds that had the force of a Category 5 hurricane — don’t just strike the flat plains of Kansas and Oklahoma. Parts of Alabama, too, have long had their own “Dixie alley” where tornadoes are common. As a native of the southern part of the state, I remember them from my childhood.
But over the last 20 or so years, climate scientists say, tornadoes have increased in frequency and severity, in Alabama and elsewhere. Columbia University professor Michael Tippett has published research indicating that tornadoes have become more common since the 1970s. “The frequency of tornado outbreaks (clusters of tornadoes) and the number of extremely powerful tornado events have been increasing over nearly the past half-century in the United States,” he and fellow researchers wrote in Science in 2016.
The authors were very careful to say, however, that they don’t know whether global warming is the cause. Tornadoes have been notoriously difficult to track over decades, and there simply isn’t enough data yet to form any conclusions.
Their careful analysis is important, especially in this debate. Scientists are usually cautious, compiling data for years, if not decades, before issuing their analyses. That’s why there’s no doubt about the scientific consensus that global warming is changing the planet, threatening humanity: The vast majority of the world’s climate scientists have come to that conclusion after decades of study.
If the United States were the nation it used to be, if it were still a place governed by a respect for science and the requirements of logic and rationality, we’d be busy trying to save ourselves from the devastation that is surely coming — for our children and grandchildren if not for us. But we’re not that nation anymore.
A people who once put a man on the moon has elected to the presidency a miscreant who values only personal enrichment, a charlatan who denounces science and claims climate change is a “hoax.” President Donald J. Trump has pushed the Republican Party, long in hock to fossil fuel-related industries, further into flat-earth extremism. The result is that the science of climate change has become one more political issue demanding a partisan allegiance.
Never mind that extreme weather events, driven by global warming, have become increasingly common, just as climate scientists had predicted. Whether or not tornadoes are a part of that phenomenon, we can see the increasing severity of floods, droughts and fires. We know that rising oceans are threatening coastal cities around the globe. We know that big insurers, though politically conservative, are pricing climate change into their policies.
Yet, we do nothing. While a liberal faction of the Democratic Party has proffered a very ambitious “Green New Deal” calling for radical changes to counter global warming, Senate Majority Leader Mitch McConnell has dismissed it as “a shift toward socialism” — as if that should end all debate. He and his GOP colleagues have offered no alternatives to deal with the climate threats we all face.
Instead, right-wingers latch onto cold weather as proof that the scientific consensus about global warming is all wrong. In January, as a brutal winter storm hit the Midwest, Trump tweeted: “In the beautiful Midwest, windchill temperatures are reaching minus 60 degrees, the coldest ever recorded. . .What the hell is going on with Global Waming(sic)? Please come back fast, we need you!”
That’s what passes for leadership from the Oval Office. Even if killer tornadoes don’t become more frequent, we’re in for severe weather — politically as well as environmentally.