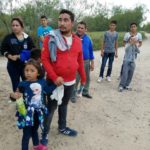 For years now, ultra-conservative politician Patrick Buchanan has been at the leading edge of the hysteria over the prospect of imminent and decisive demographic change — a hysteria that currently grips a sizeable portion of the American population. In a lengthy 2012 screed titled, “Suicide of a Superpower: Will America Survive to 2025?,” Buchanan predicted the demise of American culture, which he said would be swallowed up by waves of black and brown immigrants.
“By 2050,” he wrote, “America will be more of a Third World than a Western nation. . . America was born a Western Christian republic but is being transformed into a multiracial, multicultural, multilingual, multiethnic stew of a nation that has no successful precedent in the history of the world.”
The cult of President Donald J. Trump shares Buchanan’s racist assumptions about demographic change, though the president doesn’t have Buchanan’s intellectual trappings at his disposal. When Trump isn’t calling Mexicans “rapists” or drug mules, when he’s not dismissing black-ruled nations with an ugly epithet, he dresses up his prejudices with pseudo-facts, as he did recently when he insisted, in a tweet, that the United States cannot handle any more immigrants because “our country is FULL!”
That is no more reliable than any of the other propaganda that the president regularly propagates. In fact, the notion that the United States is full, is bursting at the seams, is flat out wrong.
According to demographers, the opposite is true. While the population currently stands at nearly 330 million, we are not producing enough children to replace the aging baby boomers. Largely because of a record-low fertility rate, population growth in the United States has hit its lowest level since 1937. While demographers are not sure why the fertility rate has dropped, social forces are surely one factor: Women are embarking on careers, marrying later and having fewer children.
As a career-minded feminist, I can hardly fault women for their choices. But a fertility rate that doesn’t reach replacement levels has consequences for the
country, including lowered economic growth. After all, in order to grow, businesses need healthy workers in their prime.
The nation also needs workers who can help pay the costs of retirees, who will consume more and more resources from Social Security and Medicare as the large cohort of baby boomers continues to hit retirement. There are now only 2.8 workers for every Social Security recipient, according to federal statistics, and that is expected to fall to 2.2 by the year 2035. (In 1950, the ratio was 16.5 workers for every recipient.) That’s a problem.
Given that, the U. S. should adopt a smart and targeted strategy aimed at welcoming migrants. First-generation immigrants tend to have more children than native-born families, so they would slow our population bust. They would also immediately join the workforce, shoring up businesses, including agriculture and construction, that need more laborers.
That doesn’t mean that we open up the borders to all comers. (Despite Trump’s frequent smears, that’s not a policy any mainstream Democrat has advocated.)
But it does mean that any serious politicians we have left — and there don’t seem to be any left with access to the White House — need to think seriously about a system of immigration that admits workers, skilled and unskilled, who will make America their home, contribute to its culture and revitalize its dying communities. The country needs not only engineers and physicians but also farm workers and nursing home laborers. The problem of population loss is so dire in some rural areas that John Lettieri, president of the Economic Innovation Group, proposes a program of “heartland visas,” in which skilled immigrants could obtain work visas to the United States on the condition they live in one of the counties facing demographic decline, according to The New York Times.
That’s an idea worth debate, but it has one glaring flaw: many of those rural areas in the “heartland” comprise huge blocs of Trump voters who don’t want migrants from Mexico or Guatemala or Pakistan moving in, no matter the contributions they’d make toward revitalizing their communities. Those aging white voters would rather have their towns slowly decline and eventually die.
Isn’t that sort of nativism the very definition of suicide?