The conservatives’ war on women

The conservatives’ war on women 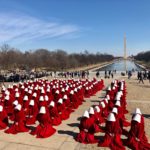 After the election of President Donald J. Trump, Margaret Atwood’s 1985 dystopian classic, “The Handmaid’s Tale,” found a new audience, surging once again to popularity with a reappearance on best-seller lists and adaptations as a television drama and an opera. Little wonder.
The novel is set in a not-too-distant future in which fertile women are enslaved, raped and forced to bear children for the infertile wives of powerful men. Women living under the iron grip of that regime, set in a place that was formerly part of the United States, have no right to their own bodies. The plot presents an uncanny and unsettling projection just a bit further along the path from our own time.
Across the land, in states ruled by right-wing Republicans, women’s reproductive rights are being slashed and burned. Several legislatures have introduced severely restrictive anti-abortion bills designed to end up before the Supreme Court, which conservatives believe is poised to nullify Roe v. Wade.
Earlier this week, Alabama’s Republican governor, Kay Ivey, signed into law a bill which the state’s GOP lawmakers proudly proclaim is, so far, the most onerous in the nation. It bans practically all abortions, even in cases of rape and incest. That means that a 12-year-old incest victim would be forced to bear the child of her familial rape. And a physician would risk up to 99 years in prison for terminating such a pregnancy.
In a staggering display of hypocrisy, Ivey issued a statement after the signing declaring that the new law “stands as a powerful testament to Alabamians’ deeply held belief that every life is precious and that every life is a sacred gift from God.” That is no mere exaggeration, no simple bit of political propaganda. It is a preposterous lie. How could Alabama lawmakers claim they value the life of a rape victim? An incest victim?
My home state may worship the fetus, but it gives children a sharp stick-in-the-eye once they emerge from the womb — especially if those children are black and poor. Take a look at the statistics. Alabama ranks 44th (6th from the bottom) in child mortality; it ranks 49th in infant mortality; and 26 percent of its children live in poverty. Furthermore, its GOP-controlled Legislature is chock full of Trump supporters eager to slash benefits such as food stamps, which allow many of those children to get a decent meal.
Alabama isn’t the only state where such hypocrisy reigns. Last week, Georgia’s Republican governor, Brian Kemp, signed a so-called heartbeat bill, which will ban abortions after about the sixth week of pregnancy, when doctors can often detect a heartbeat from the fetus. That’s so early, however, that many women don’t even know they are pregnant.
But Georgia’s ultra-conservatives, like those in Alabama, care nothing for the children once they are born. The statistics show the real story: The United States has the highest rate of maternal mortality — deaths during pregnancy or childbirth or in the weeks just after — in the developed world, and Georgia has the second-highest rate in the U.S., according to USA Today, which conducted an extensive investigation into maternal mortality in this country. More women die in Georgia as a result of childbirth than in many Third World countries.
According to the 2018 Health of Women and Children Report, Georgia ranks 34th in child mortality (16th from the bottom). And, according to the National Center for Children in Poverty, 25 percent of its children are poor.
And then there’s Mississippi, which passed a so-called heartbeat law earlier this year. It’s one of the worst places in America for a child to grow up, especially if that child is black and poor. It has the nation’s highest rate of infant mortality; it has the second highest rate of child mortality; and 31 percent of its children are impoverished.
There is no love for children among those clamoring to reverse reproductive rights. There is, instead, a barely-concealed contempt for women, a resentment of laws that have given them the freedom to control their own bodies. Little wonder that “The Handmaid’s Tale” has become eerily relevant.