The Russians are coming!

The Russians are coming! 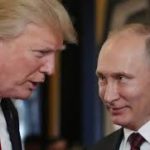 Leading up to the 2016 presidential election, a foreign adversary conducted a devastating attack on the United States. It was stealthy, strategic and effective. Russian agents, likely acting under orders from President Vladimir Putin, managed to boost the campaign of Donald J. Trump; to further polarize, anger and embitter American voters; and to weaken democratic institutions.
But that’s not the worst news from what will go down in history as a seminal strike on the United States. The worst news is this: Russia is poised to strike again as the 2020 presidential election nears, and the U.S. government is not doing nearly enough to stop it.
That’s because President Donald J. Trump insists on minimizing — or dismissing outright — the threat. And it’s now clear why: With the release of the report of special counsel Robert Mueller, it’s evident that Trump and his top campaign officials were aware, by the spring of 2016, of efforts by some Russian actors to assist his campaign and that Trump benefitted from that help. If the Russians are to be stopped, then, Congress, state legislatures and top Trump officials brave enough to contradict the president will have to step up their efforts to thwart them.
Trump and those closest to him have done nothing but stonewall or prevaricate on the subject of Russian interference. Just a few weeks ago, his son-in-law, Jared Kushner downplayed Russia’s role, claiming, incredibly, that Mueller’s investigation did much more harm to the country.
“ . .But I think the investigations, and all of the speculation that’s happened for the last two years, has had a much harsher impact on our democracy than a couple of Facebook ads,” he said.
Ahem. Russia did much more than buy a “couple” of Facebook ads in an attack that Mueller characterized as “sweeping and systematic.” Last year, Mueller indicted 12 Russian intelligence officers for hacking into the digital files of the Democratic National Campaign Committee and the campaign of Hillary Clinton. They passed embarrassing information on to WikiLeaks, which served as a funnel to credulous American reporters. The resulting headlines dominated the campaign for weeks, probably helping to turn some voters against Clinton.
But Russian efforts didn’t stop there. Taking advantage of the free flow of information in the U.S., Russian agents, according to Mueller, used social media to disguise themselves as American partisans, disseminating propaganda to disparage Clinton, boost Trump, or often, just to exacerbate the partisan divide. The disinformation campaign reached hundreds of millions of U.S. users of Facebook and other social media sites, according to investigators. Last, but certainly not least, Russian agents tried to breach electronic voting systems in at last 21 states, according to homeland security officials.
You’ve got to give the Russians credit for their savvy. While the U.S. has spent billions of dollars building tanks and fighter jets and guns, Russia, a much poorer nation, mounted a grievous attack that cost next to nothing.
Its campaign started during the administration of President Barack Obama, and his administration deserves criticism for failing to mount an effective defense. Much more troubling, though, the nation still hasn’t mounted an effective defense.
While Facebook is reportedly more vigilant now — after Obama’s quiet warnings to CEO Mark Zuckerberg were initially ignored — social media giants are still vulnerable to being used by foreign propagandists. And state-run election systems are still vulnerable to hacking by foreign agents. Congress has appropriated $380 million for election security, but that’s not enough. (Curiously, Republicans blocked a Democratic push for more funds.)
That leaves it to individual states to set aside millions more to protect their systems from cyber-espionage — funds that are less likely to be available in GOP-led states where officials take their lead from the president.
Meanwhile, cyber-security experts have told Politico that they see signs indicating that disinformation campaigns have already been launched against leading Democratic presidential candidates. Those include false allegations tying some of them to racially inflammatory gestures or messages. Brett Horvath, one of the founders of Guardians.ai, a tech company that works to disrupt cyberattacks, said, “It looks like the 2020 presidential primary is going to be the next battleground to divide and confuse Americans.”
If we haven’t learned anything from the last attack, Russia will win the 2020 election, too.