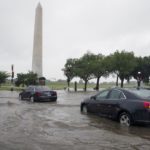 “For, after all, how do we know that two and two make four? Or that the force of gravity works? Or that the past is unchangeable? If both the past and the external world exist only in the mind, and if the mind itself is controllable – what then?”— George Orwell, 1984
As President Donald J. Trump was preparing to unleash a deluge of half-truths, misconceptions and outright lies about his environmental record, Mother Nature went to the podium first. She unleashed her own deluge — a “once-in-a-hundred-years” rainfall that made rivers of local streets, crashed through the roof of a Metro station and threatened historic documents stored in the National Archives by flooding its basement.
According to the National Weather Service, almost a month’s worth of rain fell in metropolitan Washington, D.C. over the course of an hour, the sort of extreme weather event that climate scientists associate with climate change. Warmer air holds more moisture, so climatologists have predicted more, much more, rainfall and, as a consequence, more flooding. (The melting of Arctic ice is raising sea levels, which will also increase flooding in coastal areas.)
Of course, the president never uttered the phrase “climate change” in his address on Monday (July 8). He never alluded in any way to the existential challenge of our time — a warming planet that threatens all human life. He and most of his Republican Party either deny global warming outright or look askance at scientific evidence that blames it on human activity.
According to Trump, who pulled out of the 2015 Paris Accords that might have ameliorated climate change, his administration has helped to curb greenhouse gases. “Since 2000, our nation’s energy-related carbon emissions have declined more than any other country on earth,” he said. In fact, emissions had been trending downward until his presidency. In 2018, thanks in large part to Trump’s friendly policies toward polluters, emissions began to trickle upwards again, according to The Rhodium Group, an independent research group.
Yet, Trump and his cult repeat their truth-inverting nonsense with a straight face. The president continues to dismiss experts, to marginalize scientists and even to ignore the reports of military experts, who point to the national-security implications of climate change. And his supporters, from Mitch McConnell to midwestern farmers suffering from flooding, continue to sip the Kool-Aid.
Meanwhile, back here in reality, another tropical storm, this one named “Barry,” churns along the Gulf Coast, bringing yet more high winds and flooding. Barry’s winds create peril, but the greater danger is from rising waters.
The National Weather Service has warned of flooding through eastern Louisiana, southern and central Mississippi and southeastern Arkansas. That area includes one of the nation’s great cities, New Orleans, which has been hit by deadly flooding before and will be hit again and again as climate change intensifies. When the calamitous Hurricane Katrina struck in 2005, its rainfall breached levees although the Mississippi River crested, then, at just two feet. Because of spring flooding, the Mississippi could surge to as high as 19 feet in New Orleans, according to hydrologists. This is the new normal.
The stronger storms and frequent floods as just two examples of the extreme weather events which scientists say climate change will foster. We will see not only more rainfall but also, conversely, more droughts and, of course, hotter temperatures worldwide. Last Thursday, (July 3), Anchorage, Alaska hit 90 degrees, the hottest on record. With temperatures above 80 for six days in a row, according to published reports, the city had its hottest week in the record books.
The heat turned deadly in India, where many poor families don’t enjoy the benefit of air-conditioning. Temperatures hovered at 115 degrees for weeks last month, and more than 30 people are believed to have died as a result. Scientists and demographers have long predicted that poorer nations will be harder hit by climate change. Some parts of India, they say, may be rendered uninhabitable. Some island nations, such as the Maldives and the Marshall Islands, may disappear altogether — lost like the ancient myth of Atlantis.
But if you belong to the cult of It’s a Hoax, there’s nothing to worry about. Keep pretending, and everything will be fine.