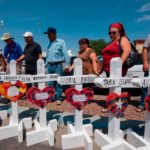 No, this is not — sadly — the inflection point, not the catalyst that brings us to our senses. Dual atrocities over last weekend will not force the nation to come to grips with our crazed worship of guns. It took us a few decades to reach the depths of this insanity, and it will take several more years to crawl back out.
Yes, many did respond appropriately to the massacres in Dayton and El Paso. Many rightly called out the race-baiting of President Donald J. Trump, whose hateful rhetoric emboldens white supremacists such as the El Paso shooter. Many pointed to the reckless, power-mad conspiracy-mongering of the gun lobby, which will not tolerate even tepid measures to increase public safety. And, yes, most of us have grown weary of a feckless Congress, which has failed to carry out its fundamental duties. But our politics remain irrationally devoted to the protection of gun violence.
Sorry for the pessimism, but the massacre of 20 little boys and girls and six adults in Sandy Hook in 2012 changed nothing. The mass murders of 58 concertgoers in Las Vegas in 2017 changed virtually nothing.
The murders of 17 students and staff at a Parkland, Florida high school in 2018 changed nothing, despite students’ admirable activism. The murders of 11 worshippers at a Pittsburgh synagogue later that year changed nothing. Neither will the deaths of more than 30 people last weekend.
Still, it’s worth looking back to understand how we got here — how American exceptionalism became synonymous with American violence. History shows that the United States was not always a culture that placed firearms on a pedestal. The Founding Fathers did not enshrine the gun as a god.
Scholars often trace our current state of affairs to 2008, when an audacious, reactionary Supreme Court justice, Antonin Scalia, writing for the majority, penned a ruling that bestowed upon individuals a right to own a firearm. That ruling overturned two centuries of precedent; over 200 years, the Supreme Court had never found such a right.
In his scholarly but readable work, “The Second Amendment: A Biography,” Michael Waldman reminds us that American settlements long had gun control laws, even during the frontier days. A well-circulated photo shows a sign posted in Dodge City: “The Carrying of Fire Arms Strictly Prohibited.” And the violence of Prohibition prompted laws severely restricting ownership of fully automatic machine guns.
Even as the National Rifle Association was morphing into a band of reactionary lunatics through the 1970s and ’80s, Congress held onto a modicum of sanity. After President Ronald Reagan was wounded in a shooting that also gravely injured his press secretary, Jim Brady, Congress passed a bill requiring a federal background check for a handgun purchase from a registered dealer. And while Joe Biden has been vilified on the left for his support of the 1994 crime bill, that measure also outlawed assault-style weapons for a decade.
But the gun fanatics play a long game, and, by the ’90s, they were funding lawyers who would write “scholarly” articles claiming that the Second Amendment bestowed an individual right to gun ownership, Waldman writes. The gun lobby was also upping the ante in Congress and state legislatures, pumping out millions to elect allies and defeat opponents. Gun absolutists took over the Republican Party and even cowed Democrats.
Meanwhile, the NRA and its ilk were becoming unhinged, trafficking in crazed propaganda that warned of a despotic government that would confiscate all firearms. They persuaded Congress to virtually prohibit public health scientists from studying firearms deaths with federal funds. They won immunity from lawsuits for firearms manufacturers — a protection enjoyed by no other consumer product. The gun lobby has even fought perfectly sensible inventions such as a “smart gun” that would feature a trigger lock allowing only the owner to fire the weapon. Why?
Whatever has motivated their far-fetched fantasies, the result has been a continuing bloodbath. The United States has the highest rate of deaths from gun violence of any of the world’s wealthy countries, according to academic research. That won’t end in a month or a year or two. This madness took hold over many years, and it will take several more years of hard work — voting, campaigning, protesting — to dispel the darkness.