Greta is right about climate change

Greta is right about climate change 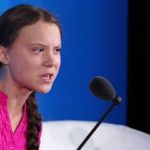 Mobile, AL. — The calendar has marked autumn, which ought to yield crisp breezes, yellowing leaves and, most of all, cool weather. But here on Alabama’s Gulf Coast, autumn has betrayed us, stubbornly refusing to give up the dog days of summer. The thermometer has registered temperatures in the 90s, often the high 90s, nearly every day for several weeks now.
Indeed, the eastern half of the United States roasted for weeks under a heat wave, with record-breaking temperatures from Birmingham to Baltimore. Atlanta hit 90 degrees or higher 23 times in September, “surprising when you consider the average September high is between 78 and 86 degrees,” according to Capital Weather Gang, The Washington Post’s weather blog.
“In all, about 209 million people, or about 71 percent of the population of the Lower 48, were forecast to see high temperatures of at least 80 degrees on Wednesday, with 131 million seeing temperatures at or above 90. These are remarkably high numbers for Oct. 2,” the blog reported.
Even before this record-breaking autumn, the National Oceanic and Atmospheric Administration had announced that 2019 would be among the five hottest years on record globally. In June, Antarctic ice was at its smallest area on record, the agency said.
There is no doubt that these extreme temperatures are linked to human-caused climate change, says Dr. Marshall Shepherd, a climate scientist. “In the area of what we call ‘attribution science,’ some of the strongest signals of climate change in today’s weather are found in heatwaves,” he said.
Shepherd noted that while climate scientists don’t draw conclusions from any single event, patterns of extreme weather cannot be ignored. Drawing on an analogy from a colleague, he said, “In an Olympic race, if a sprinter breaks a world record, it is usually by a short time span. If she broke it by 3 or 4 seconds, people would be suspicious of doping. Some of these heat records are being shattered. It’s warming on steroids.”
Yet, President Donald J. Trump reacted with ridicule to the passionate warnings about climate change delivered at the United Nations last week (Sept. 23) by teenaged climate activist Greta Thunberg. In the right-wing echo chamber, the president’s hostility was amplified and intensified, manifesting as vicious attacks on Greta’s mental health (she has spoken about being diagnosed with Aspberger’s) and politics. Fox News’ Laura Ingraham compared her to a character from the 1984 film “Children of the Corn,” about a cult of murderous kids.
Perhaps the right-wingers were so personal and vicious because they had no rational response to her emotional pleas for adults to begin to forcefully address the climate crisis. The science is irrefutable: A warming planet is already killing off marine life, hastening the extinction of hundreds of species and rendering portions of the globe increasingly uninhabitable. By the time Greta is my age, many coastal regions now on the map will likely be underwater, vast swaths of India and Africa, among other places, will likely be too hot to live in and food and water shortages will likely have fomented wars and refugee crises — unless humanity makes immediate, dramatic changes.
Unfortunately for us and for posterity, that seems quite unlikely. President Barack Obama helped negotiate the Paris Agreement, in which more than 190 countries committed to dramatic reductions in carbon emissions. Trump withdrew the U.S. from the agreement, which means the world’s most powerful nation — and one of its biggest polluters — has joined the Flat-Earthers. The U.S., in fact, has more climate-change skeptics than any other Westernized nation, according to a survey conducted by the YouGov-Cambridge Globalism Project.
That’s no accident. Our major polluters have invested heavily in a campaign to cast doubt on the science of climate change, even hiring pseudo-scientists to write reports suggesting that the cause of global-warming isn’t clear. Those same big fossil fuel companies have also invested heavily in electing politicians, mostly Republicans, who would resist any and all efforts to regulate and rein them in. Those efforts have paid off for the polluters — if not for the planet.
No wonder Greta was so emotional. Her generation is in for a hot and desolate adulthood.