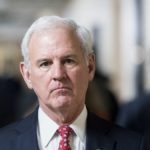 Most of the South’s fiery segregationists are dead and largely forgotten, dumped into the ash bin of history by their fierce opposition to equal rights for black Americans. If they are remembered at all, they are thought of as racist throwbacks, small-minded men who stood on the wrong side of the defining issue of their time. That’s the epitaph for politicians such as James Eastland, Ross Barnett, Lester Maddox and even George Wallace, who, despite a late-career “apology” for his racism, is still best remembered for his infamous refusal to desegregate the University of Alabama.
Few politicians who hope to continue their careers would dare utter such frank racism these days, but a number of Republicans are nevertheless working very hard to consign themselves to history’s slag heap. They have decided to vigorously and ostentatiously defend President Donald Trump, no matter how corrupt his actions or outrageous his conduct.
And history will judge them accordingly. Every Republican in Congress who excuses or defends Trump will be remembered as an unprincipled partisan hack complicit in an unprecedented assault on democratic institutions — just to advance his or her short-term political ambitions.
Two of the Alabama Republicans who have wrapped themselves around Trump’s ankle — U.S. Reps. Mo Brooks and Bradley Byrne— ought to know better. Their state’s recent history is of men such as Wallace and John Patterson and John Sparkman, leading politicians who denounced equal rights for their black constituents at every turn. Brooks and Byrne are no explicit racists, but they have chosen to ally themselves with a man who courts and encourages white supremacists.
Byrne went so far as to join Trump’s awful display of racism against four women of color in Congress. When the president insisted that the four (three of whom were born in the U.S.) “go back” to their countries of birth, Byrne offered to buy them plane tickets so they could go live in Venezuela.
Trump’s malicious assaults on American democracy go beyond his racism. He is shredding the U.S. Constitution. He cozies up to despots such as Vladimir Putin, an adversary of the United States. Trump has publicly invited foreign interference in American elections. Earlier this week, one of Trump’s personal lawyers told a federal judge that the president can commit any crime, including murder, and not be prosecuted as long as he holds the Oval Office. And, of course, Democrats are holding impeachment hearings because Trump clearly held up military aid to Ukraine until its leaders agreed to investigate his domestic political rival, Joe Biden.
Are Brooks and Byrne troubled by any of this? Not at all. They were among a small group of Republicans who could not bring themselves to condemn Trump’s decision to withdraw most U.S. troops from Syria — effectively greenlighting Turkey’s attack on the Kurds, who lost many soldiers helping the U.S. hunt down ISIS fighters. The other five Alabama representatives, including four Republicans, voted for the resolution condemning the withdrawal.
But that’s hardly the worst of it. Brooks and Byrne were at the front of the infantile parade that stormed a secure meeting room at the Capitol earlier this week and delayed the appearance of a Pentagon official who was scheduled to testify before the House Intelligence Committee. According to CNN, Byrne yelled at committee chairman Adam Schiff. Brooks and Byrne were apparently taking their marching orders from Trump himself, who had reportedly met with members of the rump group and approved their juvenile antics. Byrne proudly tweeted about his part in the mob, calling the impeachment process “a sham.”
Brooks has always been a right-winger, doubting climate change, denouncing Obamacare and opposing any efforts to grant citizenship to undocumented immigrants, including Dreamers. Byrne, however, was once a reasonable Republican with mainstream ideas. But those ideas apparently didn’t advance his career as much as he wanted. Byrne is now seeking the Republican nomination to challenge Sen. Doug Jones, a Democrat, and he apparently believes that becoming an unscrupulous Trump apologist is the winning ticket.
Byrne may well win the Senate seat he is seeking, but he has already lost any claim to integrity, decency or patriotism. His legacy, like those of the segregationists, will be overshadowed by his decision to stand on the wrong side when history came calling.