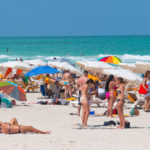 MOBILE, AL. —— Though Gov. Kay Ivey has mostly re-opened the state — restaurants, hair and nail salons and gyms included — cases of COVID-19 are increasing here, not declining. And Mobile County, home to a sleepy Gulf Coast port city, has led the state in confirmed cases for weeks now, though it has a smaller population than Jefferson County, which includes Birmingham.
Unfortunately, the case count — and the death count — will likely worsen after the bustling Memorial Day weekend, when throngs will flock to beaches, ignoring guidelines about social distancing. We have not reached our peak. The worst is not over here.
According to The Washington Post, epidemiological experts have warned that the South may experience a second wave of coronavirus in coming weeks as its governors rush to re-open and its residents embrace the freedom to catch a virus and expose others. Never mind that our best scientists, including Dr. Anthony Fauci, have said that regions need to show a steady decline in confirmed cases of coronavirus before they re-open.
The South is led by politicians who belong to the cult of President Donald J. Trump, the “very stable genius” who has publicly ruminated about giving COVID-19 patients disinfectant and who has claimed that he doses himself with hydroxychloroquine to ward off coronavirus, though physicians have warned the drug may be deadly and there is no proof it cures COVID-19. Many Southerners also continue their long tradition of disdain toward experts — George Wallace infamously called them “pointy-headed” intellectuals — and their contempt for federal authority. Even Trump, the highest-ranking federal authority, shows contempt for it, ignoring his own diplomats, assailing his intelligence experts and disputing his scientists.
In addition, the South has a disproportionate share of the nation’s poor and working-poor, people less likely to have access to decent medical care. The South’s Republican governors have refused to expand Medicaid, although most of it would be paid by the federal government — a tenet of Obamacare. Many rural hospitals have been forced to shut down for lack of funds.
As if that were not enough of a miasma to breed a viral stew, the South has another pre-existing condition: a hyper-religiosity that conflates church attendance with Christian morality. The South has a higher rate of church attendance that any other region, and preachers are ready to fill up their pews again, claiming religious intolerance to thwart any regulations that might prevent it. They ignore the many news reports pointing out that church gatherings — from choir practices to funerals — have been “super-spreaders.”
Given the South’s history, culture and politics, it’s no great surprise that Georgia’s Gov. Brian Kemp led the charge to re-open everything in late April. To prove he was being prudent, the Georgia Department of Health released doctored data claiming that COVID-19 cases were steadily declining. They were not.
Ivey at least had the clarity of mind to issue guidelines advising her citizens to continue social distancing, reminding them they are “safer at home.” In Alabama’s Gulf Coast beach towns, local authorities have passed ordinances mandating social distancing and small gatherings. But I fully expect those to be ignored as residents return to their annual celebration of the unofficial opening of summer.
According to a team of researchers at the Children’s Hospital in Philadelphia, the entire state of Alabama is likely to see a resurgence of coronavirus. On Tuesday (May 20), Montgomery mayor Steven Reed called a press conference pointing out that the city’s hospitals were already overwhelmed and urging residents to practice preventive measures.
Researchers have also warned of hotspots in Texas, Tennessee, Kentucky and along southeast Florida’s Gold Coast — with its dangerous mix of elderly residents and beckoning beaches. Miami already seeded the spread back in March, as heedless spring-breakers insisted on partying. Those beaches remain closed for now, but Florida Gov. Ron DeSantis is among the Trump-ites who insist that it’s time to fully re-open the economy.
The South seems destined for a dangerous summer.