A lifeline for Dreamers

A lifeline for Dreamers 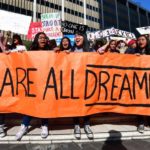 You’d think that any American president would be delighted to welcome hard-working and ambitious young adults clamoring to join the American family. But President Donald J. Trump has been openly hostile to black and brown people he could paint as “other” — dangerous, lazy, lawless, un-American.
Resurrecting the rage, resentment and racism of George Wallace for an era in which immigration has changed the nation’s demographics, Trump has created concentration camps at the southern border, bottled up asylum requests and deported people for traffic offenses. He has even gone after the young adults known as “dreamers,” mostly darker-skinned residents who are citizens in every way but the most technical: they weren’t born here.
Happily, in another stunning defeat for the Trump administration, the U.S. Supreme Court has halted the president’s attempt to deport them to countries they don’t remember, to cultures they don’t consider their own, to communities in which they could not speak the language. That’s a triumph not only for the 700,000 or so who can continue to pursue their dreams but also for the rest of us. They make the nation stronger.
According to one study, more than 90 percent of dreamers have jobs. Many have gone to college, majoring in fields from early childhood education to computer science. By some estimates, upwards of 25,000 of them are employed in health care, where workers are desperately needed. Nearly a thousand are veterans or currently serving in the U.S. Armed Forces.
Yet, they are still in limbo since the Supreme Court’s ruling merely stays Trump’s hand for now. That means Joe Biden, the presumptive Democratic nominee, should come out campaigning hard on immigration reform in general — and keeping the dreamers in particular. Even in this deeply polarized era, polls show broad bi-partisan support for allowing the dreamers to stay.
President Barack Obama enacted the Deferred Action for Childhood Arrivals program after he could not persuade a GOP-controlled U.S. Senate to pass comprehensive immigration reform. The rules for eligibility are stringent. When the program was started in 2012, it required that dreamers must have come to the U.S. before their 16th birthday.
They had to have high school diplomas, be enrolled in school or be veterans. They could not have criminal records. The program doesn’t provide a path to citizenship or permanent residential status, but it defers deportation and allows its beneficiaries to gain a social security card and a driver’s license so they can work, drive and travel without fear.
Still, Trumpists detest the program. Jeff Sessions, who wants to curb even legal immigration, attacked DACA as attorney general. The president himself once tweeted: “Many of the people in DACA, no longer very young, are far from ‘angels.’ Some are very tough, hardened criminals” — a malicious falsehood.
As Obama came belatedly to understand, a Republican Party that had long been complicit in illegal immigration — if not exactly welcoming toward brown newcomers — had turned belligerent toward the undocumented.
By the dawn of the 21st century, a Republican Party that had long pandered to those white Americans who were uncomfortable with the changes wrought by the civil rights movement, had long courted a racially resentful cadre of white voters with code words and stereotypes and had long placated those voters by pretending to elevate their interests had caved in to its most racist elements. The GOP relies on the votes of a hardy band of haters who don’t believe that Mexicans or Guatemalans or Haitians or Ghanaians belong here.
Those xenophobic Republicans clearly are not troubled by white immigrants, since Trump is married to one. First Lady Melania Trump was born in Slovenia and moved to the United States in 1996. (She is the second immigrant to whom Trump has been married. His first wife, Ivana Trump, emigrated from Czechoslovakia.) Furthermore, Melania Trump brought her parents over by taking advantage of rules that allow naturalized adults to sponsor residency for family members — the “chain migration” that Trump has decried publicly.
If Trump were a pragmatic politician, he’d drop his opposition to the Dreamers. But his presidency has been built on racial resentment, and he can hardly change course now. That’s all the more reason for immigrants and their advocates to help defeat him in November.