Old Confederacy is tumbling down

Old Confederacy is tumbling down 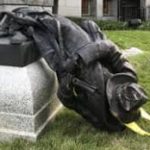 Ignore President Donald J. Trump, whose latest tactic to mollify his base is to forbid the renaming of military installations that honor Confederate military officials. The GOP-controlled Senate Armed Services Committee has already added an amendment to an all-important defense bill that would strip the names of Confederate commanders over the next three years.
The president and his reactionary constituency are losing this battle. Around the country, Confederate statues and insignia are being stripped from places of honor as business, political and cultural leaders belatedly recognize their odious symbolism.
As a black woman born and bred in the Deep South, I have spent decades pondering the stubborn staying power of the Lost Cause mythology, which transformed a treasonous war with a racist foundation into a virtuous rebellion against government oppression. That lie not only pervades history texts, cultural and political institutions and public spaces throughout the 11 states of the Old Confederacy but also throughout the nation, which has been spoon-fed falsehoods about the causes and controversies that led to war.
Now, finally, more than a century and a half after the Civil War ended, the symbols of the Lost Cause mythology are giving way. The protestors who have taken to the streets in the wake of the murder of George Floyd have not yet managed to curb the excesses of violent police officers or blunted the insidious racism that permeates the criminal justice system, but they have nonetheless accomplished something significant: The Confederacy and its flags and markers and monuments are falling as they march.
Consider this: NASCAR — as explicit a representation of Southern good-ol’-boy culture as there is — has now banned Confederate battle flags from its events. That’s near-miraculous. If you’ve ever watched a NASCAR race on TV, you’ve seen scores of flags sporting the St. Andrew’s cross-with-stars floating above the virtually lily-white crowd. The Confederate battle flag is as much a symbol of NASCAR as drivers with names like Earnhardt and Petty.
The statues of Confederate hate-mongers are also tumbling, no matter how fervently their defenders cry, “Heritage, not hate!” Tell that to my ancestors, who were enslaved — their children sold, their marriages violated, their backs scarred by the whip — for that “heritage.”
Oh, I’ve heard the lie that slavery was not the reason those 11 states seceded. The war was fought over tariffs, Confederate defenders say, or states’ rights. States’ rights to do what? Enslave black people, of course.
In March 1861, Alexander Stevens, vice-president of the Confederacy, laid out the reasons for secession in his infamous “Cornerstone” speech, in which he argued that the new Confederate constitution was founded on ideals that were the opposite of Thomas Jefferson’s founding principles.
“Our new government is founded upon exactly the opposite ideas; its foundations are laid, its cornerstone rests, upon the great truth that the negro is not equal to the white man; that slavery, subordination to the superior race, is his natural and normal condition,” he said.
After the South was defeated — its great plantations in ruin, its great men destitute, its cities scarred — its white defenders sank into self-pity. So they set about creating a story that would make their racist war seem just, the deaths of their young men a noble sacrifice, their poverty another cruel blow by Yankee tyrants. Most Confederate monuments were built not in the ashes of defeat but in the late 19th century, decades after the Civil War and just as the white South was embarking on a hundred years of Jim Crow.
It’s long past time that the saints of the Lost Cause lose their esteemed places at the entrances to courthouses, in carefully-tended public parks, even in the U.S. Capitol. And it makes no sense that U.S. military installations would honor men who were traitors to their country.
There are still those who are deeply invested in keeping their version of history in place, enshrined in monuments that glorify Robert E. Lee, Nathan Bedford Forrest, Braxton Bragg and John Bell Hood, among others. As recently as 2017, the Republican leaders of my home state of Alabama joined other Southern legislatures in passing laws to prohibit removal of Confederate monuments.
They are coming down anyway. The Lost Cause is losing.