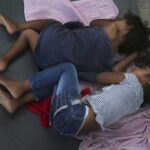 When the history of America in the early 21st century is written, it will include a viral pandemic that killed hundreds of thousands, a reckoning over centuries of racial violence and oppression and a president who stoked the prejudices of a loud minority who fear demographic change. It will also include a nightmarish policy in which the United States government snatched thousands of children from their parents, consigning many of those families to ceaseless grief and loss.
The predations of the administration of President Donald J. Trump are so unrelenting as to confound us, to render us numb to his cruelty, his corruption, his incompetence. But we should not become inured to the fate of 545 children whose parents have not been located because of a government too careless and too callous to find them. According to published reports, about 60 of those children were under the age of five.
These children, these innocents, were simply pawns — chess pieces or die on a game board — to a xenophobic administration hellbent on turning back the tide of darker-hued families trying to make their way to a better life. There are so many awful stories finding their way out of Trump’s Kafka-esque system of detention and deportation that it will take years to sort through them all.
Thousands of unaccompanied immigrant children have reported being sexually abused while in the custody of U.S. government workers. Women have reportedly been subjected to forced sterilizations. More such horrors will likely come to light if Trump is defeated. Note than although Trump officially ended the policy of “family separation” — as his officials euphemistically call it — children are still being taken from their parents at the border.
Meanwhile, NBC News reported earlier this week that the parents of 545 children cannot be found; many were likely deported to Central American while their children were still in custody.
This is absolutely heart-breaking. As the mother of an 11-year-old, I simply cannot imagine what her life would become if she were suddenly snatched away from me and I couldn’t find her.
Though they lied about it later, former Attorney General Jeff Sessions and his assistant, Rod Rosenstein, insisted on tearing families apart, believing that parents would stop trying to enter the U.S. illegally if they knew their children would be forfeit. When U.S. attorneys along the border objected, fearing for the children’s welfare, Sessions said, “We need to take away children.”
I am outraged but not surprised. I was born and reared in a small Alabama town not far from where Sessions grew up — a part of the Black Belt where segregation was rigidly enforced and white dominance rarely questioned. Sessions entered politics with a determination to return to a time when white culture was pre-eminent and white control assured. He wanted to curb even legal immigration. His eagerness to snatch children from their parents is a reminder of the cruelty of slavery — when children were sold away from their families.
Happily, many Americans were appalled when they saw news footage of crying children being pried from their mothers’ arms, toddlers bawling as they were led away, non-English-speaking pre-schoolers trying to understand what was happening. Lawsuits were filed. Judges intervened. In 2018, a federal judge ordered that all children in custody be returning to their families.
But the Trump administration had not revealed that it started taking children away under a “pilot” program in 2017. Nor had not bothered to keep records on many of the families, so it doesn’t have the names of parents or addresses in their native countries. That shows the depths of its callousness, its treatment of those families as something other than fully human.
There is in this a hypocrisy that is deeply offensive — outrageous, actually. The president’s most committed supporters remain conservative Christians, regular church-goers who are dedicated to ending reproductive freedom for women. They claim to have an undying love for unborn children.
But black and brown children already out of the womb don’t feel the love.