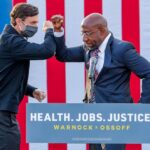 As his remarkable life was drawing to a close, Georgia Congressman John Lewis penned an opinion essay to be released upon his death. Published in The New York Times on July 30, it was an eloquent but urgent call to action, its message the same bold invocation seen in his life’s work: “Democracy is not a state. It is an act. . . Voting and participating in the democratic process are key,” he wrote.
In the weeks leading to two unusual Senate contests in Georgia, more than two million liberal-leaning voters, many of them black, heeded the call and cast ballots. In a stunning and historic sweep, they sent two Democrats to the U.S. Senate.
The failed Trump-instigated putsch cannot extinguish that achievement or diminish its glory. One of the two Senators-elect is the Rev. Raphael Warnock, the first black U.S. Senator from Georgia. In a lovely note of coincidence, Warnock is pastor of Atlanta’s historic Ebenezer Baptist Church, which Lewis attended and which was once led by the Rev. Dr. Martin Luther King, Jr.
The other Senator-elect is Jon Ossoff, who will become the first Jewish Senator from Georgia and the first Jewish Senator from the Deep South since 1879. It is no coincidence that Ossoff knew Lewis well. As a 16-year-old, Ossoff wrote a letter to Lewis seeking to become a volunteer in his office. They bonded, and Lewis became an important mentor.
Those twin victories are hugely significant not only because of historic firsts but also because they will give Democrats narrow control of the U.S. Senate. With a Republican Party mired in opposition, President-elect Joe Biden needs that control to have any hope of carrying out his agenda.
Neither Warnock nor Ossoff had ever held political office before, and most savvy political pundits thought the Senate was out of reach for them. After all, Georgia last sent a Democrat to the U.S. Senate in 1996. Even though Biden narrowly won the state — the first Democratic presidential candidate to do so since 1992 — run-offs are usually won by Republicans, whose constituents have been more likely to turn out.
But Lewis’ mantra about the importance of voting — “The vote is the most powerful nonviolent change agent you have in a democratic society,” he said many times — had been absorbed by another of Georgia’s young political leaders, the indefatigable Stacey Abrams. During a decade of service in the Georgia Legislature, Abrams began to question the years-long strategy of Democratic leaders — mostly white men — who yearned to win back the white working-class voters the party had lost. Abrams challenged that focus, insisting that the party should focus on marginalized Georgians — whether black, white or brown — who rarely or never voted.
She got about the business of proving the case, founding The New Georgia Project, which focuses on registering new voters, seven years ago. When she ran for governor of Georgia in 2018, she lost by only 55,000 votes. The election was marred by the voter suppression in which the Republican Party has engaged for years with enthusiasm; her opponent — now Gov. Brian Kemp — was then secretary of state, Georgia’s top election official. He used his office to block, challenge and intimidate Democratic voters. But Abrams didn’t fold. She fought. She dived back into the trenches to register more voters.
And she wasn’t the only one. Across Georgia, black women, especially, were leading voter advocacy organizations, raising money for voter education and knocking on doors to ensure participation. LaTosha Brown, co-founder of Black Voters Matter, told NPR that “there is a new Southern strategy that is being implemented.”
Warnock’s campaign even received an important assist from players in the WNBA, who were angered that his opponent, Kelly Loeffler, co-owner of the Atlanta Dream, was an outspoken opponent of Black Lives Matter. Before games, players wore warm-up T-shirts imprinted with the words “Vote Warnock.” His poll numbers, mired in single digits, started to rise.
Having reminded Republicans of the power of the black vote, Democrats can expect them to re-double their efforts to block it. Already, Georgia GOP leaders are discussing making absentee voting more difficult and paring back early voting. Other GOP-led legislatures can be expected to engage in similar moves.
But they will be no match for determined citizens willing to get in what Lewis called “good trouble.” His legacy lives on.