They don’t want us voting

They don’t want us voting 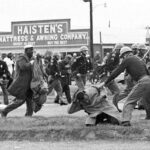 You may have been taught in middle school that a fundamental tenet of democracy is that every citizen has the right to vote. That right is the foundation of every Westernized democratic state.
You may have learned that the Founding Fathers didn’t believe in universal suffrage but that the United States has slowly expanded its democratic ideals to include women, people of color, the poor, the marginalized. You may even believe that America’s expanding democratic ideals are the reason that we can claim to be a model for the rest of the world — that “shining city on a hill.”
Would you be surprised to learn that a vocal minority of conservative intellectuals don’t believe any of that? Would you be surprised that they don’t actually believe in democracy?
They don’t, and it is a bracing bit of progress to have them state their beliefs clearly and publicly. Instead of gaslighting — pretending that voter suppression is intended to insure “election integrity” — some conservatives are being explicit: they don’t believe that every citizen should vote.
The latest to put his views in explicit terms is The National Review’s Kevin D. Williamson, who wrote, “One argument for encouraging bigger turnout is that if more eligible voters go to the polls then the outcome will more closely reflect what the average American voter wants. That sounds like a wonderful thing . . . if you haven’t met the average American voter.”
After a litany of policies and practices he believes have set the republic on the wrong course, Williamson concludes, “The fact is that voters got us into this mess. Maybe the answer isn’t more voters.”
I’m delighted that Williamson, among others, has set his reactionary, anti-democratic views out for all to digest. He is merely affirming the long anti-democratic history of National Review, whose racist founder, William F. Buckley, opposed voting rights for black Southerners. As Buckley saw it, the “claims of civilization supersede those of universal suffrage.”
“Reasonable limitations upon the vote are not exclusively the recommendations of tyrants or oligarchists. . . The problem in the South is not how to get the vote for the Negro, but how to equip the Negro — and a great many whites — to cast an enlightened and responsible vote,” he wrote.
Other conservatives have blurted out their objections to universal suffrage, though they are less self-assured and supercilious than Williamson. Defending his state’s new voter suppression tactics, Arizona State Rep. John Kavanagh, a Republican, told CNN:
“Not everybody wants to vote, and if somebody is uninterested in voting, that probably means that they’re totally uninformed on the issues. Quantity is important, but we have to look at the quality of votes, as well.”
Mississippi Secretary of State Michael Watson, also a Republican, admitted that efforts to make voting more convenient would make it more difficult for his partisans to get elected.
“Think about all these woke college and university students now who are automatically registered to vote, whether they wanted to or not. . You’ve got an uninformed citizen who may not be prepared and ready to vote automatically forced on them, ‘hey go make a choice,’ and our country’s going to pay for those choices,” he said.
It is no accident that a rash of ballot-blocking measures has cropped up in Republican-led states all over the country. Those measures are in response to Democratic victories — which, remember, Republican state officials courageously declared were free of fraud.
But the fact that GOP election officials were persons of principle just pushed the Georgia Legislature further into authoritarianism. In addition to measures that will deter individual voters, the new voter-suppression law strips local and state election officials of power, handing it over to the Legislature. In the future, the Georgia General Assembly would have more authority to intervene in elections if its members don’t like the results.
Again, that has nothing to do with preventing fraud, which did not occur in the last election. But I don’t have to make that argument since so many conservatives have given up trying to cover their authoritarian instincts.
Williamson is wrong about the principles that have made America great. Among those is its progress over generations toward ensuring that every citizen has the unfettered right to vote — even citizens as dumb as Donald Trump.