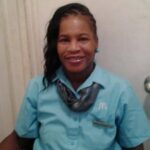 MOBILE, Al. — In March 2014, Shanesha Taylor, a black single mother, was arrested after police found her two young children, aged 6 months and two years, in her parked car while she went inside for a job interview with a State Farm Insurance agency in Scottsdale, Ariz. In the immediate aftermath, her children were taken from her custody. Though they were returned to her in a few months, she was sentenced to 18 years (yes, years) of supervised probation.
In July 2014, Debra Harrell (in the photo above), another black single mother, was arrested after leaving her 9-year-old daughter in a public park while she went to work at a nearby MacDonald’s. She was charged with willful abandonment, a felony, and, according to a televised tape of the police interrogation, grilled by police officers who were rude and condescending, scolding her for allegedly failing in her maternal obligations. Though the charges were ultimately dropped after public fury, Harrell was left in jail for 17 days while her daughter was in foster care.
Harrell and Taylor, neither of whom could find affordable childcare, come to mind because of the current outbreak of conservative outrage over the inconvenience to employers who are having troubling filling job openings. Republicans are insisting that the problem lies in the COVID relief bill that was passed in March without a single GOP vote. Among other things, the $1.9 relief package extended a boost in unemployment benefits — an extra $300 a week — through early September.
In the view of outspoken conservatives, the more-generous unemployment benefits, though temporary, have made it all too easily for lazy grifters to lie around at home, perhaps playing video games or binge-watching a Netflix favorite. The idea of the unemployed as shiftless, lay-abouts is a favorite conservative trope, a popular stereotype in the conservative catalog of condescension. It’s especially popular if those collecting government assistance are black or brown.
That notion has been bandied about for weeks here in the Deep South. Even though Alabama and Mississippi have the nation’s lowest vaccination rates, residents have clamored for “normalcy” for months and businesses have agitated to re-open. Southern governors have obliged, but owners of restaurants and bars have complained that they can’t hire enough staff to satisfy the customers clamoring to get in. Interviewed by local news reporters, business owners immediately blame the unemployment benefits, which, they claim, have made life “too comfortable.”
Those complaints were magnified by prominent Republican lawmakers after last week’s disappointing jobs report, which showed hiring had slowed dramatically, confounding the expectations of economic experts. Conservatives had a reason at the ready: overly generous unemployment benefits were allowing able-bodied folk to shirk their responsibility to work.
The U.S. Chamber of Commerce — lobbyists for high-ranking capitalists — called for an end to the extra $300 per week. In the words of Neil Bradley, the Chamber’s executive vice president, “The disappointing jobs report makes it clear that paying people not to work is dampening what should be a stronger jobs market.”
Apparently, it has never occurred to those critics that the wages paid by many businesses don’t accommodate the need for childcare. Many day centers are still not open, and many school systems are still operating on a truncated in-person schedule. Apparently, it has never occurred to them that some would-be employees are afraid to work in a crowded setting around people who will be maskless and may not be vaccinated. Clearly, it has never occurred to them that workers, even those who labor for minimum wage, have the same desire for safety for themselves and their children as those who own or manage the business. When schools started remote learning, hundreds of thousands of women stopped working because they had to take care of the kids.
Though there is no hard data showing that the more-generous unemployment benefit stops people from seeking a job, several Republican governors, including Ala. Gov. Kay Ivey, announced that they would end the boosted unemployment payments. As it happens, several of those states, including Alabama, have lower unemployment rates that the national average. So maybe some workers are taking their time to look around for a better-paying job. Isn’t that the American way?