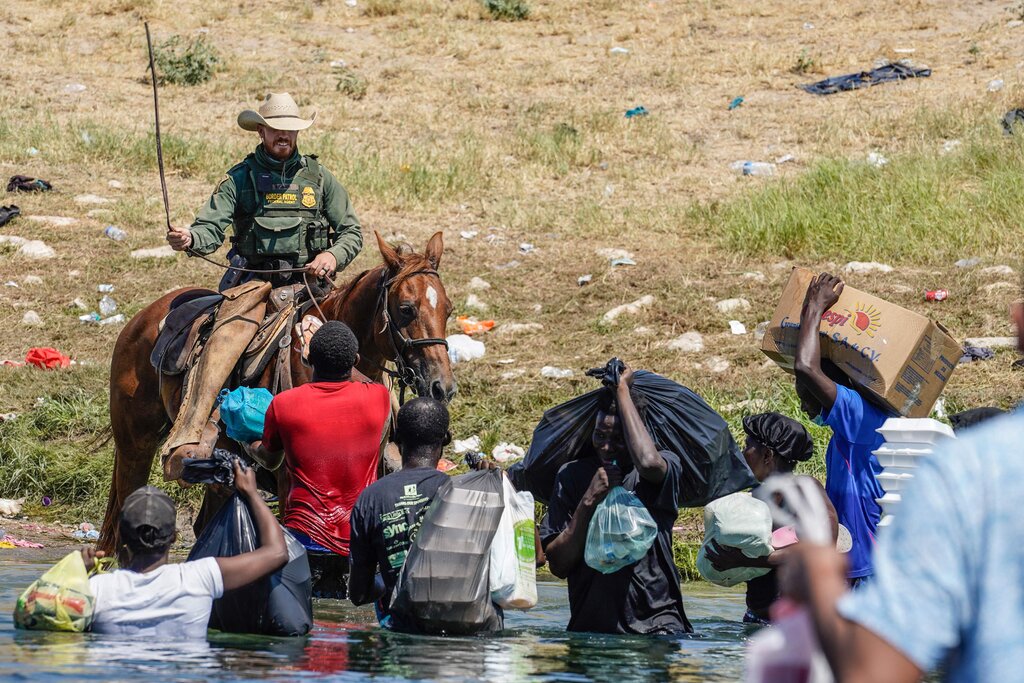 Having grown up in the Deep South under the cruel lash of Jim Crow, I was jolted back to my childhood by the images of dark-skinned Haitians driven back by mounted Border Patrol agents — terrified black people helpless before light-skinned men on horseback. I remember the television footage of Selma’s Bloody Sunday, when white law enforcement agents, armed with clubs and whips, drove their horses into peaceful black protestors. I have ridden past prisons where black inmates worked fields of cotton under the shotguns of white men on horseback.

White House spokesperson Jen Psaki described the scenes at the southern border as “horrific,” and they were that. They were also sadly reminiscent, evocative of a past that lives on, of a bigotry that will not die.
That bigotry has found new life, a fresh raison d’etre, in the rapid demographic change the nation is experiencing. A significant minority of white citizens is terrified by a browning America, desperate to retain their power as a racial majority, dependent on their status at the top of the heap.

Just listen to Fox News’ Tucker Carlson, who has abandoned any pretense of a principled conservatism to espouse explicit racism in his denunciations of immigration. He has become the most influential of the white supremacists who embrace “replacement theory,” the notion that white citizens (the real Americans, in that view) are quickly being “replaced” by black and brown immigrants who will gain political power as they acquire the right to vote.

As Carlson has put it: “I know that the left and all the gatekeepers on Twitter become literally hysterical if you use the term ‘replacement,’ if you suggest that the Democratic Party is trying to replace the current electorate, the voters now casting ballots, with new people, more obedient voters, from the third world. But they become hysterical because that’s what’s happening, actually. Let’s just say it: That’s true.”

Racism, of course, is embedded in the nation’s DNA, weaved into Betsy Ross’ flag, cemented into the cornerstone of America’s founding. The Founding Fathers had already countenanced the genocide of indigenous people by the time they got around to writing a document that proclaimed liberty for all while condoning the enslavement of those of African descent.

For 400 years, as Isabel Wilkerson pointed out brilliantly in “Caste,” white Americans have been enjoyed their status at the top of the social and cultural ladder. Even the least educated and poorest white person can count on whiteness to place him or her in a category above the best educated and wealthiest black person, she writes.

But that could change, many whites believe, if they lose their numerical dominance, a fear fueled by the election of the nation’s first black president, who was powered to office by a wave of voters of color. By Barack Obama’s second term, Pat Buchanan had published his racist tract, “Suicide of a Superpower: Will America Survive to 2025?”, which insists that immigrants of color will destroy the country.

If images of brown-skinned Hondurans and Guatemalans and Mexicans trying to cross the Southern border inflamed those fears among panicked whites, the sight of black-skinned Haitians trying to get in set off full-fledged hysteria. While many white Americans were likely upset by the mistreatment of poor people seeking a better life, others probably thought they got what they deserved.

President Joe Biden has responded to the border surge by keeping in place many of his predecessor’s harshest policies, including immediate expulsion. The president reportedly fears that his Republican rivals will once again pander to white resentment to defeat his proposals. If that’s why Biden is deporting Haitians, he is making a huge mistake.

The United States certainly cannot accept every desperate Haitian or destitute Honduran, but U.S. policy should never be based on trying to placate racists or calm white panic. Instead, Biden needs to build more refugee shelters and hire more judges to hear asylum claims.

Let the racists howl. They have always stood on the wrong side of history.