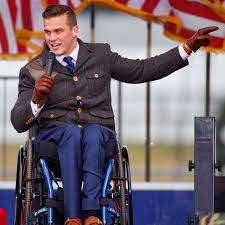 That was the far-fetched claim that brought him criticism from his leaders. Never mind that Cawthorn has long been a prodigious liar. Never mind that he is cynical enough to leave his constituents for a new Congressional district, only to come running back when the new district was tossed out in court. Never mind that he regularly traffics in unhinged conspiracy theories. Those things haven’t seemed to trouble McCarthy much.

But Cawthorn crossed a line, it appears, with a lie that might reflect poorly on McCarthy personally since some listeners might believe he and other GOP leaders were among the attendees at the alleged gathering. “This is unacceptable,” McCarthy fumed. There’s no evidence to this. . .He did not tell the truth … that’s unacceptable.”

What penalty will Cawthorn suffer for smearing his fellow caucus members? Will he be censured or tossed off committees? McCarthy didn’t pledge any sanctions that might actually affect Cawthorn’s behavior.
Instead, he said, “There’s a lot of different things that can happen. I just told him he’s lost my trust. He’s going to have to earn it back. I mean, he’s got a lot of members very upset.”

They weren’t upset by Cawthorn’s previous conduct or the inflammatory rhetoric he has used about fellow members of Congress or U.S. allies? Recently, he called Ukrainian President Volodymr Zelensky a “thug” he who is “incredibly evil” and “incredibly corrupt.” McCarthy, unlike a few Senate Republicans who criticized Cawthorn, was publicly silent on that.

That’s probably because Cawthorn, like other Trumpist zealots, has embraced the former president’s Big Lie about a stolen election, a false claim that, in the bizarro world of the current GOP, has become the party’s foundational truth. Like Cawthorn, Rep. Lauren Boebart (R-Colo.) and Rep. Marjorie Taylor Greene (R-Ga.) remain in good standing in Republican circles, although they are dangerous extremists, because they spread that lie. By contrast, partisans have placed a target on the back of Rep. Liz Cheney (R-Wy.) because she refuses to endorse the lie or bow to former President Donald Trump.

Cawthorn has drawn a slew of primary challengers because of his clumsy effort to get elected from a new district that would have stretched to the outskirts of Charlotte, giving him a higher profile and more national visibility. But legal challenges resulted in a re-districting map that virtually wiped out the new district, so Cawthorn was forced to do a turn-about.

His character should have been clear early on. Confined to a wheelchair since a car accident during his senior year of high school, Cawthorn told outrageous lies during his rise to political stardom. He claimed that the accident kept him out of the Naval Academy, when in fact, he’d been rejected before the crash. He also claimed that his best friend left him in the fiery wreckage to die, when, in fact, the friend dragged him to safety. Additionally, several college schoolmates have accused him of sexual misconduct.

With his latest antics, many of his old supporters are upset, accusing him of abandoning his constituents. Sen. Thom Tillis (R-N.C.), also fed up with Cawthorn’s behavior, is backing one of his challengers. Still, Cawthorn has high name recognition and a formidable war chest and might well win the primary. If so, he would easily go back to Congress from his heavily Republican district.

Meanwhile, Boebart and Greene are also sitting pretty, raising money and raising hell. During President Joe Biden’s State of the Union speech, as he was discussing his late son Beau, Boebart heckled him. Greene, for her part, spoke at a white nationalist rally in February. Her appearance did draw rare criticism from party leaders but no actual sanctions.

It’s hard for them to fall out of favor with fellow partisans as long as they remain in favor with Trump.