Gov. Ivey and the Big Lie

Gov. Ivey and the Big Lie 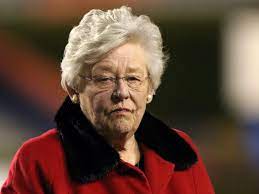 MOBILE, Al. —Kay Ivey was serving as lieutenant governor of Alabama in 2017 when Robert Bentley, then the governor, resigned following revelations of an extra-marital affair with an aide. When Ivey took office as the accidental governor, she hewed closely to the contours of her party’s rightwing politics, and that was enough to get her elected to a full term in 2018. Republicans have dominated state politics for years now, and Ivey was expected to continue its traditions of thinly-veiled bigotry, contempt for the poor and ostentatious religious piety.

But Ivey didn’t pander to the paranoid or play the role of the Mad Hatter for those ultra-conservatives who have adopted lunacy and lying as political fundamentals. Last year, she kept a mask mandate in place longer than some of her fellow Southern Republican governors. And she urged Alabama residents to get vaccinated in a July press conference, blurting out her frustration with those who refused as deaths rose in her state.

“Folks [are] supposed to have common sense. But it’s time to start blaming the unvaccinated folks, not the regular folks. It’s the unvaccinated folks that are letting us down,” she said at the time.
But that was then. A 77-year-old lung cancer survivor, Ivey is campaigning for re-election, and she is desperate to win. So she has thrown aside decency, ethics and even truth to embrace the lies, the bigotry and the anti-democratic tendencies that are now hallmarks of the Republican Party. Winning is everything, apparently. If you have to abandon reason, champion falsehoods and wallow in racism to succeed, well, so be it.

She is hardly the only Republican who has decided to follow the well-trod road of political expediency, to cast aside reason and morality, to value victory over all else. The party of Lincoln is unrecognizable — a mendacious Trumpist cult that no longer even pretends to champion democracy.

Just take a look at the all-out effort by party leaders to ostracize and defeat Rep. Liz Cheney of Wyoming, daughter of former vice-president Dick Cheney. The family is well-known for a steadfast conservatism. But the Congresswoman simply will not embrace the Big Lie, the outrageous notion that President Joe Biden stole the election. She has also joined Democratic efforts to investigate the insurrection of January 6, 2021. For that, she is a party pariah.

By contrast, party leaders have had little to say about the racist antics and paranoid lies of Rep. Marjorie Taylor Greene of Georgia. Greene has praised Vladimir Putin, quoted Q-Anon nonsense and had her Twitter account suspended for spreading COVID vaccine misinformation. She has also enthusiastically endorsed Trump’s Big Lie about election fraud. She drew mild criticism from House Minority Leader Kevin McCarthy for speaking to a white nationalist group in March, but she barely noticed.

Ivey, for her part, began to move further rightward as soon as she announced her re-election campaign. She made TV commercials denouncing Biden’s vaccine mandates, and she joined other Republican governors suing to overturn them.

But Ivey resisted the Big Lie until recently, when, perhaps, one of her challengers, Lynda Blanchard, began to get a bit too close in the polls. (Ivey faces eight challengers in the May Republican primary, but the only one of any note is Blanchard, who served under Trump as U.S. Ambassador to Slovenia.) Blanchard is running a well-funded campaign which began with an embrace of Trump’s lie about election fraud. She also criticized Ivey as welcoming “Joe Biden with open arms.” Ivey had done no such thing, but she had not drunk the Big Lie Kool-Aid.

Now she has. One of Ivey’s ads claims, “The fake news, big tech and blue-state liberals stole the election from President Trump, but here in Alabama, we are making sure that never happens.” She also has an awful ad denouncing immigrants that ends with “No Way, Jose.”

Many people Ivey’s age start to think about a what sort of legacy they will leave. If the governor has thought about it, she clearly wants hers to be a record of winning. It doesn’t matter if she had to channel George Wallace to do it.