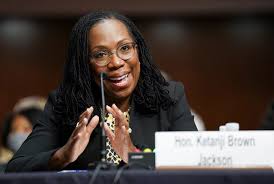 In 1851, Sojourner Truth, who had been born into slavery, gave a remarkable speech at a convention organized by suffragists. She brilliantly noted perceptions of her womanhood as contrasted to the womanhood of her white sisters.

“That man over there says that women need to be helped into carriages, and lifted over ditches, and to have the best place everywhere. Nobody ever helps me into carriages, or over mud-puddles, or gives me any best place! And ain’t I a woman? . . . I have borne thirteen children, and seen most all sold off to slavery, and when I cried out with my mother’s grief, none but Jesus heard me! And ain’t I a woman?” she asked.

Truth’s speech came to mind as I was watching the confirmation hearings for Judge Ketanji Brown Jackson, who was subjected to a barrage of inane and inappropriate questions by Republican senators grandstanding for the cameras. Among those was Sen. Marsha Blackburn (R-Tenn.), who asked Jackson, “Can you provide a definition for the word ‘woman’?”

It’s unlikely that Blackburn ever heard of Sojourner Truth’s speech; she may never have heard of Truth. But Blackburn knows how to drape herself in the politics of the past, as do her GOP colleagues, who infused their harangues against Jackson with racism, sexism, trans-phobia and a healthy dose of hypocrisy.

Perhaps the Grand Old Party doesn’t want to take us all the way back to 1851, when slavery was still the law of the land, when black people were regarded as less than human, when women could not vote and could not own property in several states. But leading Republicans obviously have a vision of America as most righteous in the early 1950s, before the civil rights movement had blossomed and the Supreme Court had begun a progression of rulings favoring rights for the marginalized. Conservatives are waging war on modernity.

They are clear about that now — no longer speaking in coded language or hiding their resentments behind a thin veil of civility. Republican senators and rightwing pundits began spewing their explicit bigotry against President Joseph Biden’s Supreme Court nominee before she was named. They declared her an “affirmative action” choice — unqualified for the job — simply because Biden had promised to name a black woman.

Never mind that they had raved about former President Donald Trump’s choice of Amy Coney Barrett partly because she is a woman, as Republicans had praised President Ronald Reagan’s decision to name the first woman to the court, former Justice Sandra Day O’Connor. Sen. Thom Tillis (R-N.C.) celebrated Barrett as “an inspiration to millions of young women in this country.” Barrett and O’Connor, as Truth would have noted, are white, so that’s different.

The racist tirades continued when the confirmation hearings began, as Jackson endured a bizarre set of questions about critical race theory from Sen. Ted Cruz (R-Texas), even though the subject of books available to students at Georgetown Day School is quite unlikely to ever come before the U.S. Supreme Court. Republican senators also sought to smear Jackson as soft on crime by attacking sentences she had handed out in child pornography cases. The “soft on crime” canard served double duty: it is used against liberals of all races but it also reminds bigoted whites that any black person is suspect where crime is concerned.

Blackburn’s little sideshow over “womanhood” was her attempt to trap Jackson in conservatives’ crusade against transgender Americans. But that gambit wasn’t as shocking as another fusillade she unleashed in a separate video statement — an attack on the Supreme Court ruling that legalized the use of contraceptives. Apparently, Blackburn doesn’t believe Americans have any right to birth control.

Not to be outdone, Sen. Mike Braun (R-In.) told reporters that the Supreme Court should not have legalized interracial marriage but should have left it to the states. (He later tried to walk it back, but he was clear enough when he said it.) States’ rights? Where have we heard that before?

This crowd apparently wants to live in Andy Griffith’s “Mayberry,” where there were no women in power and no black or brown people, period. Do they know it’s fiction?