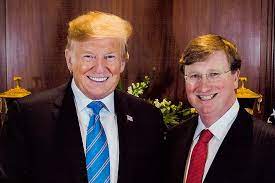 Recently, the governor of Mississippi reaffirmed his campaign against the teaching of history with a blizzard of falsehoods and flagrant nonsense recited on camera.

It’s too bad there was no one as courageous as Russian TV editor Marina Ovsyannikova to sneak up behind him holding a sign with the words, “No lies. Don’t believe the propaganda. He’s lying to you here.”

In a video posted to his official Facebook page, Gov. Tate Reeves insisted, “Children are dragged to the front of the classroom and are coerced to declare themselves as oppressors, that that they should feel guilty because of the color of their skin, or that they are inherently a victim because of their race.” That’s a bold-faced lie, of course — Reeves didn’t name a single classroom where that has happened — but he nevertheless used the fabrication to justify Mississippi’s version of legislation that prohibits instruction in critical race theory.

Around the country, Republicans are racing to outflank each other with outrageous accusations against “woke” Democrats who are allegedly destroying America. There is no falsehood too fantastic, no lie too ludicrous. Among the worst of these demagogues is Florida Gov. Ron DeSantis, who publicly bullied a group of high school students earlier this month because they were wearing masks.

Approaching the podium where he was about to speak, DeSantis told the students, onstage for his appearance, “You do not have to wear those masks. I mean please take them off. Honestly, it’s not doing anything. We’ve gotta stop with this Covid theater. So if you want to wear it, fine. But this is ridiculous.”

Not only did DeSantis manage to humiliate a group of kids, but he also disputed centuries of public health wisdom with his claim that the masks weren’t “doing anything.” Photos of public gatherings during the 1918 Spanish flu epidemic show Americans wearing masks.

As Russia continues to pummel Ukraine, commentators in this country have been quick to point out Vladimir Putin’s far-reaching control of media outlets. He has shut down independent news media, and state-controlled Russian TV broadcasts nothing but mendacious tales about Ukrainian attacks on Russian citizens. Many Americans seem surprised that Russians believe that.

But a significant minority of Americans are also willing to believe far-fetched theories about masks and vaccines and classroom curricula. (That’s not even counting the Fox TV viewers who buy into Tucker Carlson’s support for Putin.) Republican politicians are as talented as Putin at propagating distortions and outright fabrications about their political rivals and the larger culture.

It’s no coincidence that public school classrooms are the set pieces for this propaganda. Around 90 percent of American children are educated in public schools, and parents are naturally concerned about what their children are being taught. It is easy to agitate them into believing that classrooms have become infused with nefarious doctrines.

The distortions about critical race theory — an arcane doctrine that only surfaces in college classrooms — have become part of the GOP playbook. Most Republican legislators don’t know what CRT is, but their campaign is actually about intimidating teachers who may want to discuss the nation’s history of slavery and violent racial oppression. Some teachers have already shied away from anything that may be deemed controversial, including pedestrian lessons about black history.

In one video posted after signing the law, Reeves claimed that won’t happen: “Any claim that this bill will somehow stop Mississippi kids from learning about American history is just flat-out wrong.” But one white Mississippi educator, Toby Price— former assistant principal at Gary Road Elementary School — was fired this month for reading to students a children’s book called, “I Need a New Butt.” Imagine what would have happened if the book had been about the perils of life for black people in the post-Reconstruction South. Imagine a teacher trying to get high school students to understand the lies and distortions embedded in Lost Cause mythology. Any teachers doing that would risk termination.

Tate Reeves and his allies have more in common with Vladmir Putin than they’re willing to admit.